In a Moment of Welcomed Clarity, Jason Witten Flees the ESPN Broadcast Booth 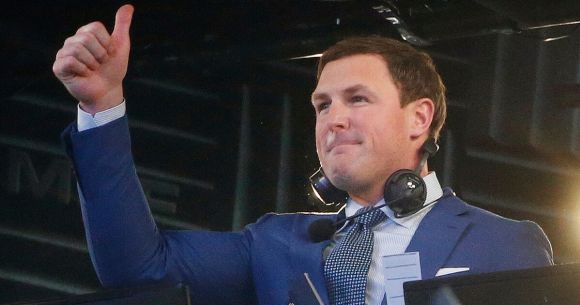 Well, it appears that Jerry Jones has extended a lifeline to Jason Witten.

The former and now apparently currrent Dallas Cowboys TE was historically bad in his one and only season in the ESPN broadcast booth, displaying limited personality and substandard communication skills.

But alas, both Witten and a grateful nation have been freed from this waking nightmare, as he'll be returning to the warm bosom of the Crypt Keeper.

It's definitely for the best.

That's right Jason, he pulled a rabbit out of his head.

Witten will now be removing his stupid man suit and slipping his Cowboys uniform back on yet again, presumably to catch 35 or so passes for around 325 yards and maybe a score or two.

While his production will be middling at best, that's not the point.

By returning to the field, the worst color man in human history is able to save face and leave a gig he was clearly not comfortable doing.

It's also a good deal for the Mothership, which can now find someone who doesn't punctuate plays with long bouts of silence or unsolicited political propaganda.

There is also the reported possibility that the old man is grooming Witten for the head coaching position, a development that would finally put Jason Garrett out of his ginger misery.

In addition, Witten is now free of the lengthy broadcasting shadow cast by his former teammate and current CBS football sage Tony Romo.