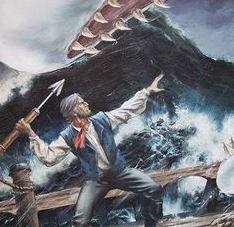 There are villains out there you can get to know and love.

We get it. Dude's hungry.

Virtually everybody can identify with that. No wonder he goes to the lengths he does.

Can you picture coming home to this every night after getting blown up, dumped on, dropped from great heights, and whatever else?

And who hasn't experienced a bout of frustration here and there trying to get what we need?

It's even possible to have a soft spot for villains who seem to answer to a higher cause, even if we don't really know what it is.

Dude was a villain who signed villains and won Super Bowls with them, which is all he cared about. He embodied all that was the essence of old-time football.

When Davis went to war with Commissioner Pete Rozelle, it was as if he was battling the NFL's emerging business model that replaced Raiders vs Chiefs with the sports equivalent of IBM vs Exxon.

Davis had a street-fight mentality that's missing in the NFL's villains today.

They're all corporate kajillionaire scoundrels -- today's robber barons -- squeezing every last dollar outta their life's blood, the fans who put up with it all.

So when Dallas Cowboys owner Jerry Jones mixes it up with Roger Goodell, it's easy to hope they find a way to both lose.

Here's how screwed up the league owners are:

David Boies is the Tom Brady of his craft. Dude's got more notable-cases than Brady has rings.

Boies is no stranger to the NFL. He represented the league in the lockout.

He's also got time on his hands after the New York Times severed ties for chicanery on behalf of his current client, Harvey Weinstein.

Jones has issued an ultimatum to the other owners that he's filing a lawsuit on Fri 10 Nov if they don't put the brakes on Goodell's extension.

It's no surprise to anyone outside those good ole boys that The Commish has got to go. Kinda like the Cowboys' war room thinks of Jones every NFL draft day.

When Davis picked a fight, it seemed like Old School was rising against the machine. When Jones does it, the whole thing seems so corporate. Probably because it is.