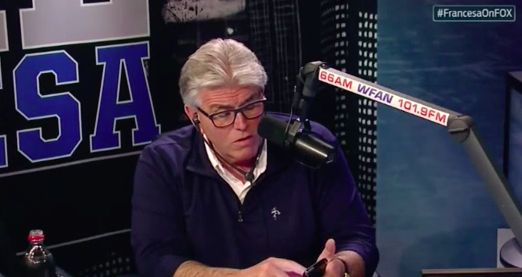 Mike Francesa was a complete hack before his long-past-due but unfortunately premature retirement from radio, but he's really been phoning it in since returning to the New York airwaves.

Speaking of phones, the Sports Pope appears to be getting the bulk of his material from his device, as he's apparently unable or unwilling to retain information.

But if you're looking for sharp NFL Draft analysis, you've definitely come to the right place.

Forget about Mel Kiper Jr or Todd McShay, because Big Mike is injecting his expertise directly into your bloodstream.

Prepare to be educated, courtesy of Your Sports Holiness:

Of course, sometimes the Pope seems to forget he's on the air, and we're subjected to radio gold such as the following:

We are treated to 30 seconds of dead air as Mike Francesa tries to find a longshot golfer to wager on in the Honda Classic. Silence is essential in the radio game. pic.twitter.com/taIrQekfq8

Yep, that was definitely 30 seconds of silence and gutteral moans before the big guy provided us with his golf wisdom, before then literally reading the PGA schedule for the next couple of months, presumably off of his phone.

What the hell, here's one more:

It's been almost five years since Mike Francesa learned that soccer players use both legs to kick the ball.

As you can imagine, Big Mike keeps the Funhouse pretty busy.