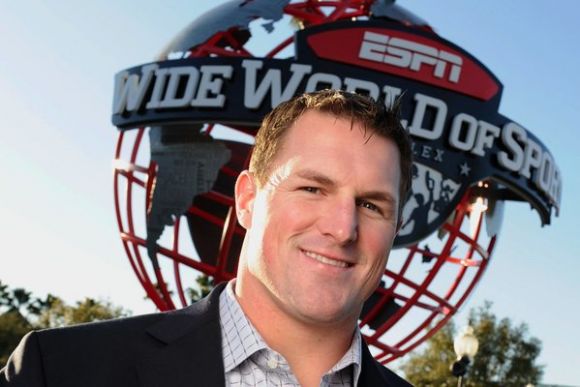 This whole Jason Witten in the booth experiment on ESPN's Monday Night Football is off to a dubious start.

The problem appears to be that the former Dallas Cowboy and brand new color analyst isn't particular adept at providing ... well ... analysis of the game.

During last Monday's broadcast of the Steelers' tight win in Tampa, Witten made a comment that distracted us from his general lack of skill in the booth:

Of course, as with anything even perceived to be politically motivated, the Internet hive started buzzing.

Jason Witten has been so bad in the booth for MNF, but he just called all the roughing the passer penalties... “too left wing”... get this man off the air

Oh @JasonWitten, I used to be a fan of yours...until you became a surprisingly bad commentator and then used the phrase "left wing" with these roughing the passer calls (even though many of us, Dems and Reps, don't like these calls) https://t.co/ExwULKDs0m

Yep, these criminally bad roughing calls are one thing the left and right can agree on.

It's almost like Hillary is on the competition committee.

This phony outrage is utter nonsense, as it's pretty clear that Witten wasn't attempting to make any kind of political statement.

Honestly, that's probably giving this dude 'way too much credit.

The Mothership appears to have dropped the ball on this one, which is shocking because their judgment is usually pretty sound.

The reasoning seemed to be that Tony Romo's best bud would by default just become entertaining in the booth based on knowing Tony Romo.