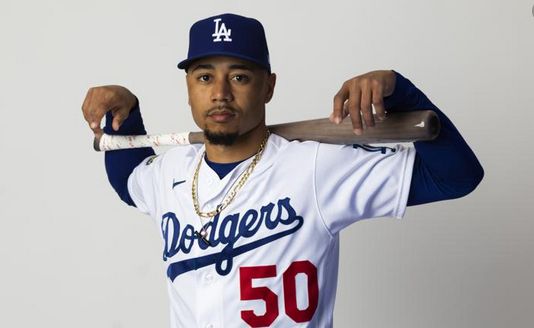 Mookie Betts obviously knew what he was doing.

Which meant the Boston Red Sox knew what they had to do. At least, to their way of thinking.

A good number of their fans didn't agree, but the Los Angeles Dodgers were fine with it. They knew if Betts turned down a package like that, sooner or later, they'd be in the mix for his services.

Or the Yankees. Maybe even the Angels.

In this instance, though, the Dodgers had better chips to trade, which to most BoSox fans, wasn't saying much. However, Boston management was in dump mode, so they figured the best they could get was a trio of touted farmhands with a nod to the Twins for taking Kenta Maeda and shipping a fourth prospect to Fenway.

All that was left for the Bums to do, then, was nail down Betts' services for an extended period of time.

Safe to say, then, the Mook's at the top of his game.

Here's what those numbers look like in human form:

That's because he was comparing it to his 2018 MVP season:

Not bad for a dude who's turning 28 in October, when his new club is expected to have quite a run. The Dodgers will no doubt expect him to be a factor in multiple situations.

Betts is second only to Mike Trout in the richest-contract standings.

He joins Trout and four others as the players who currently have cracked the $300million mark in total compensation. The others are:

Of course, they'll all taking a bit of a slice outta their paychecks in this season from hell. They'll still make it to Safeway every week, but it remains to be seen how long.

It remains to be seen if the salary standings are the only ones that'll matter in 2020.