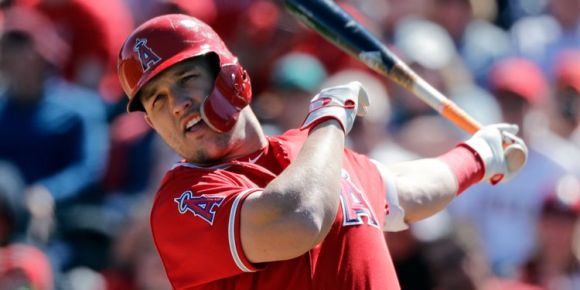 A new report was released recently showing participation in baseball at all levels is up 21% over the last four years.

Maybe more kids are noticing the guaranteed salaries being handed out these days.

Then again, maybe because the game -- like most sports -- is just fun.

Nobody has more fun playing baseball than Mike Trout, and now dude's getting paid $430million over 12 seasons because no sport quantifies that sorta fun like the MLB.

That's right. Trout's deal made headlines on the business channels.

So much for California's jock tax being a drag on the Angels' bargaining position. Like Bryce Harper and Manny Machado, Trout got a total figure that satisfied him.

And why wouldn't he be?

Dude clearly likes the California sun, Angels fans, the club's talent pipeline, and dual-threat teammates like Shohei Ohtani, who may be the only player in history to play while recuperating.

There's absolutely no doubt about his numbers.

Damn near all of them are stratospheric:

As to the Halos' Albert Pujols deal being a cautionary tale, Trout's just reaching his prime instead of being past his salad days. And who knows? Dude's prime may extend to his mid-30s at the least.

His WAR projections through the course of his contract are staggering:

Here's the contract valuation for Mike Trout's 12-year, $430 million extension with the Angels. If he's worth more than 44.5 WAR from 2021 to 2032, this contract is a win for Los Angeles. You have to believe that he will easily reach that total. pic.twitter.com/wM1QDVI44R

Now, all the reasons that persuaded Trout to jump now and rule out the promise of riches and kingdoms from his home-area Phillies or the cash-spinning Yankees have got to happen.

And he's gotta stay away from debilitating injuries. Who knows, for example, what Mickey Mantle woulda done if he didn't catch his cleats on that drainpipe during the 1951 World Series?

MLB wishes Trout would ascend to the sorta national profile of Harper or long-time stars such as Clayton Kershaw and Giancarlo Cruz Michael Stanton. Somehow, that's just not him.

As a result, dude may have the richest contract in the history of North American sport, but his off-field revenues just aren't there.

Then again, with the deal he's got, it's as if he'd ever notice.