What Was Once Albert Pujols Is Done for the Season 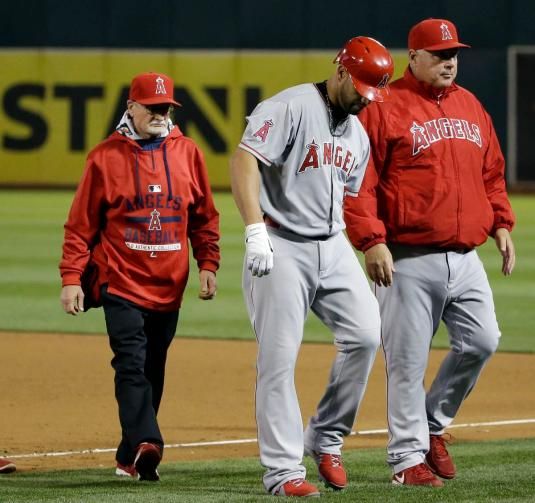 The Machine is broken.

Not for the first time, either. Nor the second. And so on.

It's basically been that way since Albert Pujols took the cash and ran with it -- probably the last time dude really ran -- to the Los Angeles Angels.

Since then, the larger-than-life slugger's left a frustrating trail of physical and statistical debris.

The latest is that a knee injury requires surgery and, this time, Pujols is done for the season.

Dude's nature is to rehab like hell and be ready for Spring Training 2019. There's no doubting his pride.

However, there's an abundance of doubt about his future.

In John Helyar's brilliant account of baseball's business history, Lords of the Realm, he cites what could've been a watershed moment in the game's economics.

The Messersmith-McNally court decision ushered in free agency, and the only owner who truly realized its impact was none other than the Oakland Athletics' maverick owner, Charles O Finley. OG may have been batshit crazy, but he apparently understood the marketplace better than his peers.

Finley proposed only offering one-year deals to players, making everyone free agents every winter. With a glut of talent out there, contract values would stay relatively low.

This went nowhere. Player salaries went to Pluto. It's been a buyer's market ever since.

Ultimately, this led Angels owner Arte Moreno to tempt the game's greatest player at the time with the game's most insane deal.

And there it is.

The hell of it is, Pujols keeps showing flashes of his former self. Dude's passed a couple of major milestones this season:

Even when he's not getting hits, he's doing a decent job of driving the ball. Still.

Pujols has three years remaining on his contract, but if he can't manage some facsimile of a comeback next spring, dude's gotta think about other factors. Like hanging 'em up before he becomes a bonafide parody of his former self.

The Halos are surely thinking the same thing.

St Louis is in the race with home-growns. Los Angeles is mediocre yet again.

Maybe Moreno should've spent the $240million that went to Pujols on a copy of the Cardinal Way manual instead.