Ohtani Goes Where Only Babe Ruth Has Gone Before

Published on 5-Apr-2018 by Alan Adamsson 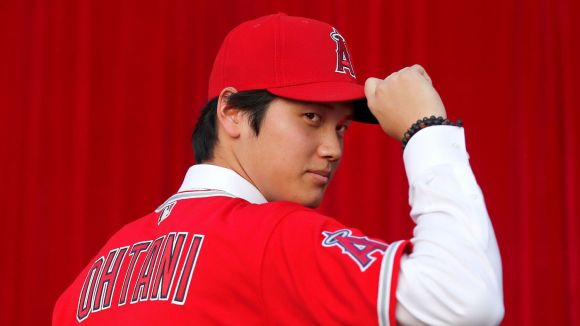 As if it needs any clarification, spring training is just that.

Many a brow had begun to furrow when the Japanese Natural, Shohei Ohtani, didn't exactly have a spring that lived up to his billing.

Could it possibly be due to the 23-year-old was adapting to a different culture, different surroundings, and well knew it was spring training?

Seems like dude had a plan, and it's coming together quite nicely.

It was all but inevitable that Ohtani was gonna duplicate Babe Ruth's legendary feat -- in his extraordinary 1921 season -- sometime this year, namely:

Dude didn't waste any time, either.

Six strong innings in his mound debut put paid to the former, as the Los Angeles Angels downed Oakland, 7-4, on Mon 5 Apr:

Ohtani didn't make his batting debut until the Halos' second home game, getting plugged into the lineup in the No 8 slot, where more fastballs is often the order of the day.

He got a few from Cleveland's hurlers, enough to go 3-4, which included his first MLB bomb as Los Angeles pasted the Indians, 13-2:

Dude's got a hint of Ichiro Suzuki in that stroke, doesn't he?

Anyway, just to show that dinger wasn't a fluke, Ohtani did it again the next day.

This was one the Angels really needed, too, and off two-time Cy Young winner Corey Kluber, no less:

If the Angels get into the playoffs by a mere one game, this could've been it.

Ohtani's for real. For this week, anyway.

And it wasn't just The Babe that he tracked down:

The trick now is to keep him from being burned out from all his two-way heroics.

If the Angels have ever had a plan before -- and if any club's got a shaky history in that regard, it's them --  this is one they'd better mind.

Ohtani can definitely offer them a few tips on its advantages.