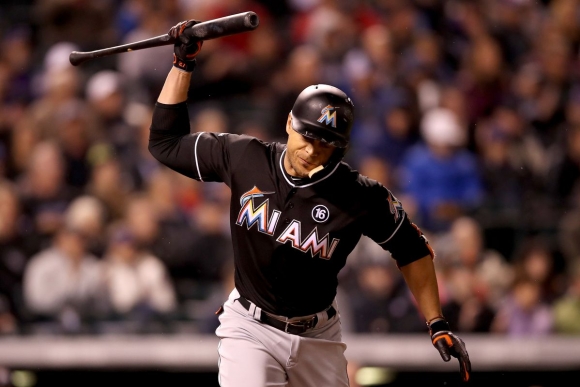 Derek Jeter's been in countless situations during his baseball career.

But he's never been in a staredown.

Dude's in one now, big time.

Jeter thought he'd given Giancarlo Stanton a harsh choice, but The Colossus raised the stakes with preferences of his own.

When Jeter and major money source Bruce Sherman purchased the Marlins, who knew they were gonna be Jeffrey Loria Lite?

Seems like they're amateurs at tells in high-stakes deals, too.

Stanton virtually dared them to keep him on the payroll after rejecting trade overtures from the St Louis Cardinals and San Francisco Giants, no matter how much sense at least one of them mighta made.

Ironically, former Cardinal Matt Holliday made an impressive and impassioned argument to Stanton on behalf of St Louis.

Now, it seems he could be who Stanton's replacing on the New York Yankees.

This, of course, is making Jeter look like an idiot.

Good luck with that.

Stanton's called Jeter's bluff on keeping him and his salary on Miami's books. That was never an option.

The Cardinals and Giants were willing to absorb most of Stanton's contract as well as shipping regulars under team control and top prospects to the Marlins.

That won't be happening with the Bombers or any of the other four if they ever express an interest.

Unless Stanton shocks everyone and reverses course on the Cardinals' or Giants' deals, Jeter's totally botched this situation.

Seems he's not even good yet at being Jeffrey Loria Lite.