Kentucky Derby in August: It's Authentic

Published on 5-Sep-2020 by Alan Adamsson 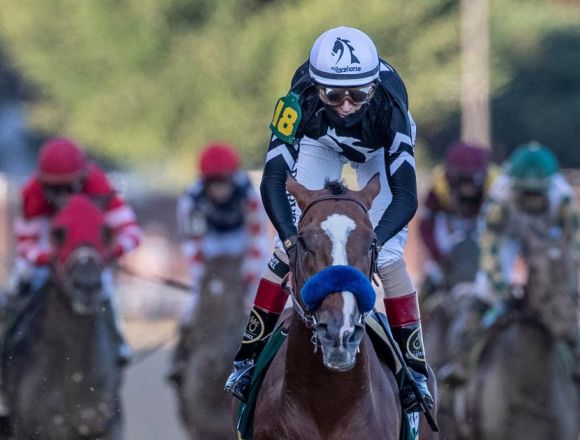 Right before post time, Hall of Fame trainer Bob Baffert had to be wondering if this was going to be yet another one of those days in the Year from Hell.

One of his two entries in the 2020 Kentucky Derby -- the real one, not the virtual race -- got a tad antsy heading into the gate and tossed his ride.

On the bright side, that was 15-1 shot Thousand Words and not 8-1 entrant Authentic.

It turned out to be one huge blessing about two-minutes-and-change later.

Both of Baffert's 3-year-olds in this race may have been unassuming ciphers in the crowded 18-horse field in which only 15 answered the call, but when Authentic broke from the cluster early on -- possibly aided by starting away from the fray in Gate 18 -- he lit the afterburners.

While damn near everyone was waiting for Belmont Stakes winner Tiz the Law to make a move that turned out to be not enough, OG wound up cheering on his sixth Derby winner.

This victory enabled Baffert to join the legendary Ben Jones as the only trainers to win six Runs for the Roses, made all the sweeter because unlike his most recent Derby champions -- American Pharoah and Justify -- Authentic wasn't a favorite.

Safe to say jockey John Velazquez proved why he's also in the Hall of Fame.

Incidentally, this is the first wire-to-wire winner the Derby's seen since 2002. That's when another Baffert horse -- War Emblem -- seized the lead and never surrendered it.

Authentic's nose provided a handsome return, as did those who saw past Mr Big Show's 45-1 odds to win:

It's strange enough having the Derby in September, not to mention being the Triple Crown's second jewel this year -- the Preakness is slated for Sat 3 Oct -- but the rescheduling did keep its streak intact of running for what's now 146 consecutive years.

Through it all, this is the first time since 1945 that it wasn't staged on the first Saturday in May. World War II had something to do with it then, but it did have spectators. Covid-19 put paid to that notion this time.

Not that there wasn't stirring and buzzing nearby, though.

Despite the odds, Authentic did.

So it can be done.