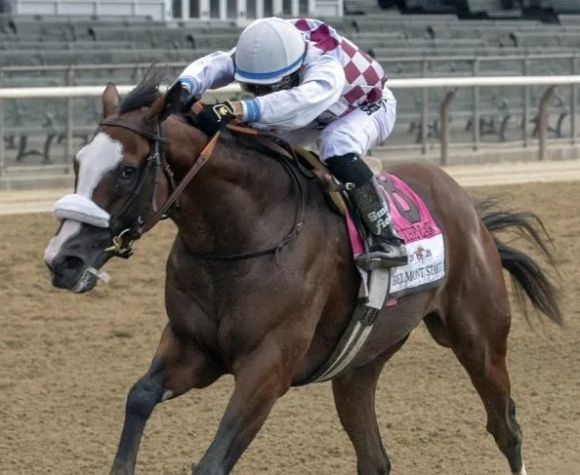 So now there's a betting tip to sit on for the next century-and-a-half:

If the Belmont Stakes is being run under weird conditions and a New York horse is in the field, that's the play.

This has been money whenever it's happened over the course of the race's 152-year history.

OK, maybe that's only twice, but it's still trending at 2-for-2 and worthy of including in the family heirlooms.

Back in 1882, the Stakes' 16th running, New York-bred Forester outpaced a field of three over 1½ miles at the old Jerome Park Racetrack in the Bronx.

He won by 5½ lengths over Babcock, enabling his owners to pocket $2600.

To be clear, this race wasn't run on a back-40 somewhere. Jerome Park had big-time trappings, or so this painting alludes: Just look at the horse that stopped in mid-race to gaze upon the splendor of it all. It's probably better than his ultimate fate has gone unrecorded.

Belmont Park has long since hosted what's usually the third jewel of North American racing's Triple Crown, and on 13 occasions, 100,000 screaming spectators watched history being made.

Not so in 2020, which will ultimately be known at the year sports entered the Twilight Zone.

There may have been 100 onlookers taking note of a different kind of history here, as in:

It is if they were gonna place an investment on a 4:5 favorite's nose.

In that respect, Tiz the Law didn't disappoint.

The pride of upstate New York shifted from cruise control coming outta the turn and wound up going away down the stretch, winning by 4½ lengths:

Keeping with the homie theme, jockey Manny Franco may be from Puerto Rico, but dude calls this his home track.

Only the punters who went exotic got rich, but hell, money back is never a bad thing ...

The 2020 Triple Crown is already weird, but this is where it gets interesting:

To date, though, long layoffs don't seem to faze Tiz. He'd already won after eight- and nine-week intervals, and his picked off this one after 12.

For the moment, anyway, the trainer's spotlight will shine on who's here -- 82-year-old Barclay Tagg -- as opposed to who's not.

Tagg's only interested in New York horses, and while it's not true he trained Forester, OG's stable has finally found another Crown winner to complement Funny Cide, who claimed the Kentucky Derby and Preakness in 2003. The irony then was he couldn't complete the Triple in his home state.

Now, 17 years later, he's got the final jewel. No doubt the wait to gather two more will seem like another 17.