Published on 2-May-2020 by J Square Humboldt 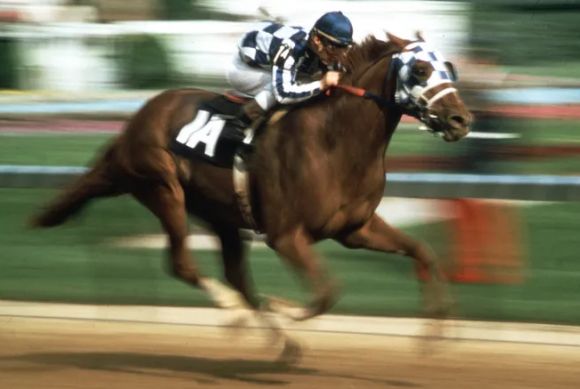 Of all the computer-generated competitions the Covid-19 pandemic has spawned, this had to be one of the coolest.

To the surprise of virtually no one, 7:2 favorite Secretariat emerged as the legend of legends.

Here's how gaming provider Inspired Entertainment prepared for the race:

This was not a predetermined outcome.

The fundamental probabilities only established the odds of each horse winning. Those with a higher probability value weren’t necessarily going to win; they just had a greater chance of doing so.

The draw was just like any other race, right outta the hat:

Derby rituals were conducted as if the actual race was happening.

The ceremonies began with Churchill Downs bugler Steve Buttleman playing Call to the Post from the front steps of his Louisville home:

At what would have been post time for the 146th #KyDerby, we ceremoniously played the call to post for an empty @ChurchillDowns.

150,000 kindred souls wished they were filling those stands.

For 145 years, any available viewpoint woulda been taken, as it's hoped they'll be able to do on Sat 5 Sep, when the live event will hopefully occur.

What is the meaning of the Kentucky Derby? Even in uncertain times the Derby is everything. #KyDerbyAtHome pic.twitter.com/yExFaKXYNn

But that's for then and this is now, because it's the best anyone can do at the moment.

For spontaneity, because randomness makes that the only option, NBC play-by dude Larry Collmus was on hand to cal the action as it happened:

Watch it again! The 13 Triple Crown winners face off in a virtual race under the Twin Spires of Churchill Downs.

Incidentally, betting on this race was verboten.

Instead, fans selecting the winning horse online were entered to win a VIP experience at the actual Derby this fall, and Churchill Downs pledged to match $1million in fan donations to COVID-19 relief.

Maybe this virtual victory will give Secretariat an entire new generation of fans.

He might even serve as a role model here and there.

It's not every event that can dredge up history like this and make it look as good as they did.

If any horse does the triple this year, it'll be a first with the Derby being the last race run. After the 1½ miles of Belmont -- all things being equal -- the Derby's 1¼-mile distance will seem like a sprint.

Affirmed is eight years old now and pulling in $200,000 per studly performance, so imagine what Secretariat would command these days. Food for thought.

If a virtual race circuit ever forms and they program breeding into the mix, maybe he'd get it on for a wad of crypto. Lotsa crypto.