Published on 9-Jun-2018 by Alan Adamsson 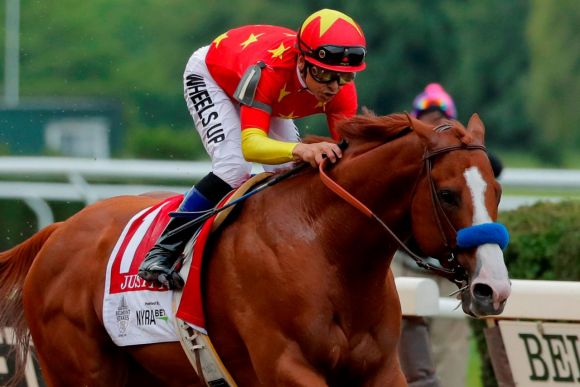 When this horse answers questions, it leaves no point unmade.

Not even Mr Ed could be more emphatic.

The last thing Justify will ever worry about is an empty feed bag.

His bloodlines trace back to the likes of undefeated Triple Crown winner Seattle Slew.

Just by watching him strut and pose away from the track, it's easy to tell he knows he's special. So far, all he's done is go out and prove it.

After coasting to claim the Kentucky Derby, Justify and jockey Mike Smith emerged from the Preakness fog to find themselves winning in a surprisingly close race. It was enough for wonder to set in prior to the Belmont Stakes.

After all, the first two jewels of the Triple Crown were virtual sprints compared to Belmont's 1½-mile jaunt.

Not only that, the Belmont boasted a well-honed field of nine contenders, more than any other Triple Crown winner had ever faced.

Even more daunting, Justify drew the No 1 gate, so breaking from the rail would be huge.

Dead still until the gates opened, and then ...

Bob Baffert has now trained the last two Triple Crown winners. Dude's only the second in history to achieve that status.

Hall of Famer Mike Smith is now the oldest jockey ever to ride one.

Not as awesome as Justify's stud fee.

The hard yards are over. Time to go bang some mares, horse-dude.