Published on 5-May-2018 by J Square Humboldt 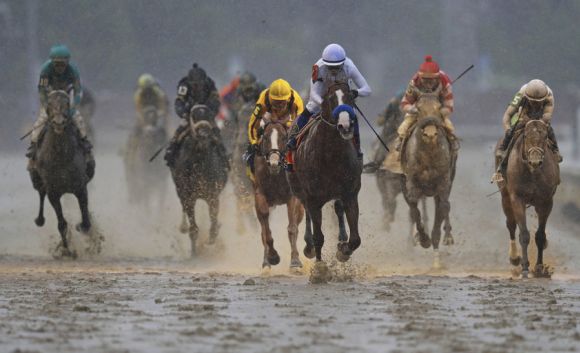 Today, it was made.

Kentucky Derby favorite never broke from a gate as a two-year old, thus becoming the first horse since 1882 win this race without doing so.

The specter of crushing that curse didn't faze many punters. Justify was the favorite and proved it on a track better suited for growing rice than opening Triple Crown season.

Paying $7.80 to chalk chasers spread the happiness all around.

However, one of the track's more joyous humans had to be Hall of Fame jockey Mike Smith.

Not only did he strike a blow for OGs everywhere by becoming the second-oldest jockey to bring home a Derby winner, just look at how he emerged from the 1¼-mile gallop:

It's only a matter of time before the endorsement offer comes in:

It'd help, of course, if Justify claimed the other two Triple Crown jewels, and those odds look pretty decent, too.

The Preakness field looks like it's gonna be thin:

So, barring a monumental upset in Baltimore ...

... the Belmont Stakes looks to have another Crown showdown when Justify, jockey Smith, and trainer Bob Baffert come rolling into Nassau County.

Baffert's a Triple Crown winner whose last monster horse came from outta nowhere. That was in 2015, when the weirdly-spelled American Pharoah, who now makes more per bonk than Stormy Daniels.

Justify was three-for-three this year prior to the Derby. Right now, a six-for-six season appears very much a possibility.

Tide would be all for it. Nothing like a clean sweep.