An American Pharoah Dons the Derby

Published on 2-May-2015 by J Square Humboldt 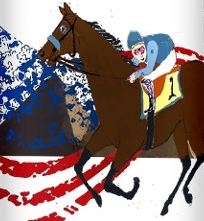 Until today at Churchill Downs, the only Pharaohs from California to make a national impact were celluloid anti-heroes:

They'd be those fun lovin' JDs from American Graffiti.

Dudes were best known for their creative initiation scene, forced upon Richard Dreyfus's character as penance for leaning on one of their rides:

Well, now they have company, even if the newcomer's name isn't spelled in the usual way.

The name American Pharoah was actually inspired by owner Ahmed Zayat's heritage, but the thoroughbred had a royal bloodline of his own, counting Unbridled -- the 1990 Kentucky Derby champ -- among his forebears.

With his physical presence and nostril-flaring drive, it wouldn't have been a surprise to see Earl Campbell in there, too.

But this West Coast steed wasn't a secret to those in racing circles, especially with über-trainer Bob Baffert calling the shots.

And when post time rolled around, the star of the show didn't disappoint:

Close call, and yet the result never seemed in doubt. Jockey Victor Espinoza hit the Derby winner's circle just last year, and he played the line, wide as it was around the last turn, with a steady hand.

So for the next month, the American Pharaoh hypefest will kick into a higher gear. And for the first time in recent memory, it'll be legitimate. No matter how it's spelled, and axle cables be damned.