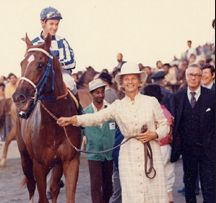 It could well have been an historical moment, the way Justify made a mockery of the competition.

People try to fool you and make you think they know horse racing.

If you haven't already discovered the error of their ways to your detriment, you're a lucky human.

Justify's just getting started of course, but he's got a long way to go to match up with the sport's best ever.

Here's what everyone needs to know about the ponies:

The five greatest horses of all time ...

Here's Secretariat in the 1973 Kentucky Derby:

Here's Man o' War, who never ran in the Derby:

There can only be one best-ever.

The clock does not lie.

OK, that soundtrack will never make it on Little Steven's Underground Garage like most of the tunes featured on The Daily Player will, but the point is crystal clear.

Secretariat is the best racehorse ever.

Want to watch something unfair?  Check out the 1973 Belmont Stakes:

Totally unfair! Big Red was one of a kind.

I got to meet him. We went to the farm where he was retired. Red was standing 'way out in the pasture. The man at the farm said get your camera's ready and shouted Red, come here, boy!

That damn horse came running right at us at what looked to be 1000 miles an hour.

He got about 20 feet from the fence and came to a complete stop. I swear that horse posed for us. Head up, shoulders back, chest out, nostrils sucking in air andpushing it back out again.

He knew he was famous!

He had a look in his eye, and I knew in my heart that this horse was well aware he was the best ever. It was amazing.

The man replied, Nobody pets Red!

With that, the horse took off like he was shot from a cannon onto the the end of the field.