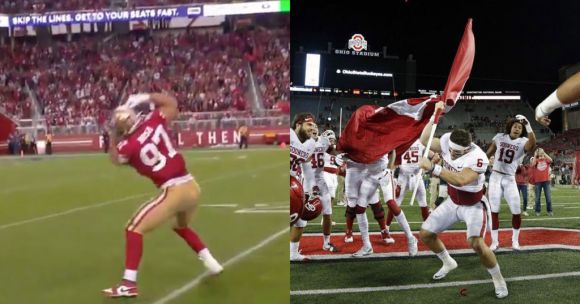 A number of narratives emerged from the most recent ESPN Monday Night Football tussle, most notably that the San Francisco 49ers are pretty good at this game right now.

Of course, another thread explores the possibility that the Cleveland Browns are a complete fraud.

However, we'd like to focus on the interesting subplot involving Niners DE Nick Bosa and Browns actor-for-hire Baker Mayfield.

It seems safe to say the former enjoyed the upper hand last night.

San Fran abused the Browns, 31-3, with Bosa spending a good portion of the evening in the lap of Mayfield.

This game appeared to be very personal for the rookie.

We may have an answer as to why:

Joe Tessitore was kind enough to provide some background, but here's the college flag-planting in question:

While these types of things can get rather silly, that isolated act was undeniably egregious.

Meanwhile, Bosa's got some game:

It's unclear when the NFL started tracking flag plants as an official stat, but we'll look into it.