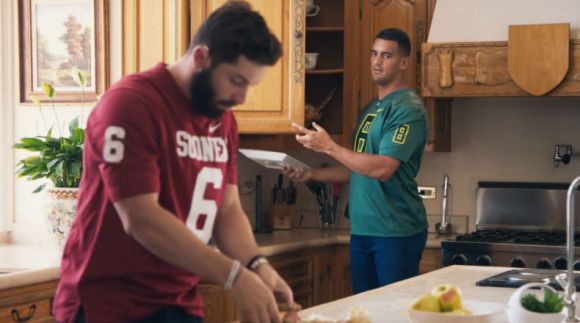 The Cleveland Browns' relentless hype machine was unplugged this past Sunday, at least for one week.

But despite the Browns falling ,43-13, at home to the Titans in a game that wasn't even that close, at least their young chucker was able to squeeze three hours into his busy production schedule.

Part of the endless Browns positive off-season spin was Mayfield becoming a marketable celebrity, and as such he's been in demand.

For example, the Progressive people have him pimping home and auto insurance in a series of moderately clever ads.

But back to the game for a moment.

While there's plenty of blame to pass around for this debacle, dude really played like shit.

Take a look at this late pick-six:

Malcolm Butler picks off Baker Mayfield and takes it back the other way for a TD. That's the cherry on top for Mike Vrabel and the #Titans. pic.twitter.com/dDVwjz4hkl

Mayfield was probably thinking about his next Hulu spot.

Or another one from Progressive.

Maybe Flo should be under center for the Browns.

We must remember it's only one game, and both his current coach Freddie Kitchens and college coach Lincoln Riley are still on board.

If he could only just clean up that fourth quarter.