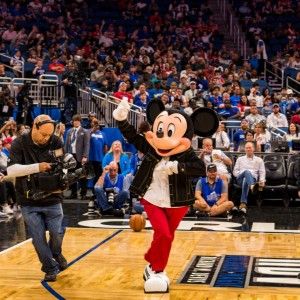 The leagues are showing their firm grasp of the obvious by realizing the time has come to fish or cut bait:

After considering all the alternatives, the NBA's taking its turn to pull back the curtain and reveal what it's been scheming and plotting in order to fire up the remainder of its season and/or playoffs.

To the surprise of absolutely no one, the league's confirmed it's smoothing out the details for turning parts of the 39 square mile Disney World complex into the NBA Bubble:

The following is a statement from NBA Chief Communications Officer Mike Bass: pic.twitter.com/8gfK5iVXs8

How does the communications officer for a kajillion-dollar enterprise not know to sectionalize text by using white space?

That looks like he ripped the passage from a damn Russian novel.

Eyestrain aside, the NBA's going through with what MLB, the NHL, and even the Big3 considered but ultimately rejected:

One advantage for being the third league to announce resumption plans is the public's been braced to understand what they're gonna get.

That in turn will depend on what the broadcast contracts dictate what's gonna be required for leagues and teams to salvage as much of the season's revenues as possible.

"Everything is pointing toward a return of the NBA this season at a single site in Orlando at Disney World."@wojespn with the latest details ⤵️ pic.twitter.com/yx48YvyNLt

Right now, the magic number seems to be 70 regular-season games to keep the regional networks happy. A few teams, like the Lakers, will need to play seven more, while others, like the Hawks, are only three games away from that target.

Surely, one reason why the centralized hub suits the NBA is they've sorta done this before. Their Vegas Summer League has provided a template that works in a short-term environment. Expanding that to a private property like Disney World will still present a new set of logistical issues, but the league's clearly decided there's nothing they can't overcome.

Look for the NBA to descend on Coronado Springs, complete with:

Additionally, there's the ESPN Wide World of Sports Complex, with a hospital nearby and having three arenas:

Whatever route it takes, the NBA is counting on firing up the games again the first week of July. The specific dates will be determined within the next month, after which quarantines will be decided and training camps will commence.

This summer will never have seen so many sports, even if they're only available on-screen. Fans will damn near need another quarantine lockdown to keep track of them all.

Then again, perish the thought.