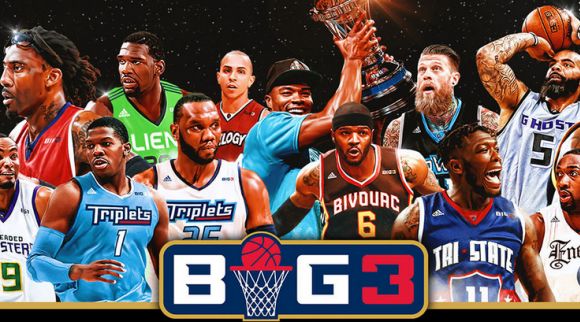 With the sporting world so starved for action that they're reduced to watching NASCAR drivers do iRacing and Belarusian soccer, this oughta go mainstream when it hits the screens:

Real dudes with real name recognition playing real hoops while being on camera every hour of the day and night.

All in the safety of a real big house they're building to keep everybody and every movement under quarantine during the Covid-19 pandemic.

Damn right it could.

That super-spittin' entertainment magnate Ice Cube had already teamed with Big Brother producer Jeff Kwatinetz to bring the Big3 basketball tour to the world, so they're uniquely positioned to make this work.

In fact, they're uniquely positioned, period:

This extravaganza was actually in the works before the pandemic changed our daily lives.

The plan was originally to stage the show in Las Vegas, but it's now going to be located in Los Angeles. Entitled BigBrother: Big3, here are the basics:

This is gonna be the Big3's fourth season, and it does seem like dudes have cracked the code.

Their most innovative move was to turn the season into an event circuit similar to the PGA, tennis, and motorsports. They set up shop in a city, play a round of games, pull up stakes, and take the show to their next stop.

It's growing a fanbase, which can follow all the action from anywhere via video channels. Last year's title game drew a decent crowd:

The fun part of this quaran-tourney could be the off-court goings-on.

As this is a 12-team league with various levels of name-brands and NBA egos, checking in on them after they've just went after it against each other could produce a novel dynamic.

Of course, it could also go where Big Brother goes, where everyone knows the go.

Specific dates haven't been announced yet. We just know it's gonna have a three-week run before the Big3 regular season begins in Memphis on Sat 20 Jun, subject to the pandemic.

This show, though, will go on.

The housing-&-gym complex hasn't been finished yet, but residents are being rounded up. So far, the commitments include:

No one can say for certain when live-action, simulation-free sports is gonna get going again. Until then, the Big3's got a short-term fix that Mr Cube intends to make a long-term fixture. One that's immune to pandemics.

Update: Score another one for the pandemic. The event was cancelled.