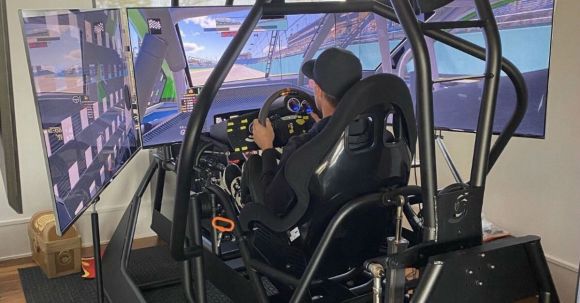 Maybe Ryan Newman can come back earlier than anyone expected.

Dude may still have a few cobwebs to clear, but if the Covid-19 pandemic continues to keep sports on the sidelines, he might be up to getting behind a wheel connected to a video screen.

Quite a few of his buds were satisfying their competitive itch by doing it, too.

iRacing's putting the e in NASCAR so they can start faux bumper hugging again until the pandemic subsides.

And damned if they didn't get a virtual circuit arranged.

Welcome to the eNASCAR iRacing Pro Invitational Series. That even sounds like a real-world title, even more so than, say, the NASCAR Gander RV & Outdoors Truck Series or something.

iRacing isn't new, and it's well known to many drivers on the various NASCAR circuits. That's because a good number of simulation games out there are high quality, but most will agree that iRacing is the most realistic of the lot.

So true, in fact, there's even the eNASCAR Coca-Cola iRacing Series, where the world's best simulation drivers compete in a season for more than $300,000.

Believe it or not, that's more lucrative than the competition they've just rolled out here, because there's no prize money.

This didn't stop Denny Hamlin from firing up his high-end $40,000 simulator for this racing series, though.

During Sunday’s iRacing event, I’m pledging $100 for each lap I lead and $5000 if I win the race to benefit families affected by COVID-19 in the Homestead-Miami area. @NASCAR_FDN @feedthechildren. Who’s with me? @JoeGibbsRacing @KyleBusch. For more info https://t.co/tibiUfh4oK https://t.co/tH3q2EfD4R pic.twitter.com/1ADXTXOPoe

Dude's a dude, for all the right reasons.

Hamlin hosted five races last night so guys could "figure out how to race around each other" and whatnot.

Elsewhere, here's your first clue that Kevin Hamlin is no relation:

I’ve been running on a laptop on a cardboard box in our dining room. I do have a new @NZXT system and ultra wide monitor on the way, but something like this is all you need to get started to see if you enjoy it, which you will. pic.twitter.com/n7sfaAvgEs

Anyway, in a star-studded field that sat in various living rooms, tuned in to the virtual Miami-Homestead track, Denny Hamlin out-dueled Dale Earnhardt Jr, making the winning move on the 100th and final lap's last turn, to claim the virtual victory.

For one race, at least, Hamlin's barefoot bravado proved a superior style to Dale Jr's one-hand on the wheel.

And FS1 was there to cover every screen angle, or however you'd describe it:

Damn. Just a bitta Talledega Nights there with that love tap to decide the issue.

Amazingly, this coverage looked more real than reality itself:

Hamlin's no stranger to iRacing. In fact, this was his 31st virtual checkered flag in it.

What's more, this is where Dale Jr first discovered him, long before Hamlin moved up to -- and started raking in big bucks on -- the NASCAR trail.

Full marks to Timmy Hill, too, who's a seasoned veteran of the iRacing circuit and a compliant responder when it's his wife doing the post-race interview:

Post race interview brought to you by my at home reporter @LucyH_Says! pic.twitter.com/eYWwbo5JiJ

All in all, this was a pretty cool way to spend a race day when no race day was scheduled.

With no real end in sight for the pandemic, eNASCAR is something racing fans may have to get used to for a while.

Frankly, it won't be that hard to do.