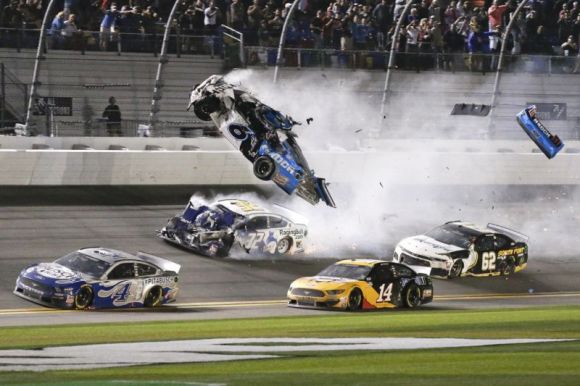 Only four drivers in Daytona 500 history have ever won back-to-back races:

Ironically, it won't be this feat by Joe Gibbs Racing's top driver that will be this year's most vivid memory, and it's not that the race was postponed to Monday due to rain.

It's how Ryan Newman still walks among us after this race is a miracle for the ages:

Who coulda guessed that a popular comedy based at one of those tracks would foretell a heart-stopping drama at the other?

After what happened to Newman, it's fortunate we can look at that and still laugh.

It's a tribute to the cars' safety features these days that he'll be one of those who's laughing.

Until the last laps, Joey Logano was the poster boy for the way this race was being run. Dude ran ultra-aggressively all day, which served him and his No 22 car quite well. For 19 others, though, not so much:

Newman's luck was first unfortunate and then unbelievable. In one moment, dude's got a shot at his first-ever victory at Daytona. In the next, he's bloody lucky to be alive and -- hopefully -- in one piece:

Officially, Hamlin won by 0.014 seconds, the second-closest margin of victory in race history. He and his crew began to celebrate their achievement until news got to them of Newman's peril. It took the medical crew 10 agonizing minutes to extract him from the car and get him into the ambulance.

Newman's second pit crew of the day was composed of surgeons and nurses. The nature of their repairs will be announced sometime in the near future.