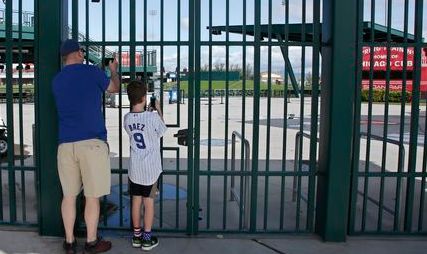 It can be convincingly argued that if anything has sobered North American society into the harsh reality that is the Covid-19 pandemic, it's sports.

Sure, the stock market went to hell, state governors are doing what they can to step in for the federal government's aimless reaction to the situation, and schools are shutting down.

However, it was the entire sporting calendar getting blown outta the water that underscored just how dire this crisis actually is.

Covid-19 -- aka novel coronavirus -- has already altered what we're seeing on the news. Now, it's eliminated sports from the things we do every day just to maintain.

Who knew Rudy Gobert would be the tipping point?

"Maybe the diagnosis of the big man from France did our country a huge favor."@notthefakeSVP says Rudy Gobert's coronavirus diagnosis was a wake-up call for everyone. pic.twitter.com/pEjnrTeyxY

March Madness is gone, which surprised more than a few coaches, including one named Few:

Gonzaga coach Mark Few: “I’m extremely disappointed. I think all of us felt we could postpone it even until May and if we needed to cancel, we could then.”

He felt there was a 100% consensus from everyone he talked to on postponing it now as opposed to just canceling it now.

There was probably also a 100% consensus in the NCAA offices that if anything could be done to save their own personal $1billion ATM, they woulda done it.

The sports calendar carnage is everywhere.

This void's also gonna take a bite outta broadcasting and streaming, too.

It's still possible some games and events can be rescheduled, but there will be red ink in rights payments and ad revenues.

What's more, with sports being one of the few categories that are better seen live, some cable execs are apprehensive that their prolonged absence could accelerate cord-cutting as many viewers may be forced to trim their budgets with the economy looking to enter a period of belt-tightening.

The concern is real:

Live sports coverage is that important, which should be a surprise to absolutely no one with a ounce of fandom in their blood, especially when there's nothing else to do in this currently infected world.

Covid-19's become a damn nuisance no matter where we turn.

However, it looks like a life that fans are gonna endure in the near future and who-knows-how-long after that.

Just another reason why breaking out in health can't come a moment too soon.