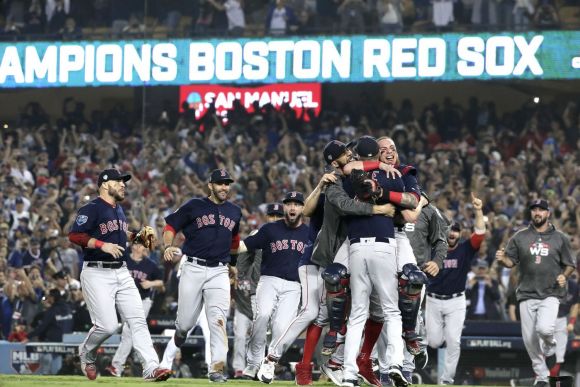 If two observations from Game 3's marathon weren't obvious then, they are now:

It should've been even more clear that after knocking the 100-win New York Yankees and 103-win Houston Astros outta the playoffs, the 108-win Red Sox had a clue about what they were doing.

True, dudes had to survive a magnificent performance in Game 4 by Rich Hill in Game 4 before an incredible set of miscommunications led to the LA arson squad seeing what they could do to make a 4-0 Dodger lead interesting again.

It helped that trade deadline afterthought Steve Pearce kept his hot streak alive, and JD Martinez is simply the steadiest hitter in the game.

Here's a little snippet about the double-edged player that Manny Machado can be:

And so it was that one of the most coveted players at the trade deadline contributed to the Dodger cause.

However, it's doubtful he did enough to displace Corey Seager when he returns to action.

An upbeat Corey Seager is back on his feet after hip surgery, eager to resume throwing next month after Tommy John surgery and “absolutely” confident he’ll be playing shortstop for the Dodgers next year. https://t.co/pzVBlQjCww

KOed Machado for the win

But like Clayton Kershaw's future, that's for the Dodgers to sort out.

The Red Sox, meanwhile, have solidified their position as one of baseball's greatest teams.

It was no mean feat to clinch each of the 2018 playoff series on the road, especially when those venues were Yankee Stadium, Minute Maid Park, and now, Dodger Stadium.

It helped that David Price finally snapped into a groove.

Dude was full-service in the playoffs, from starter to set-up to whatever.

And whoever thought they'd ever hear MVP and Steve Pearce in the same World Series sentence?

No wonder the World Series is the dream of every kid who plays the game.

Every player, too, because you never know when your day in the sun will come.