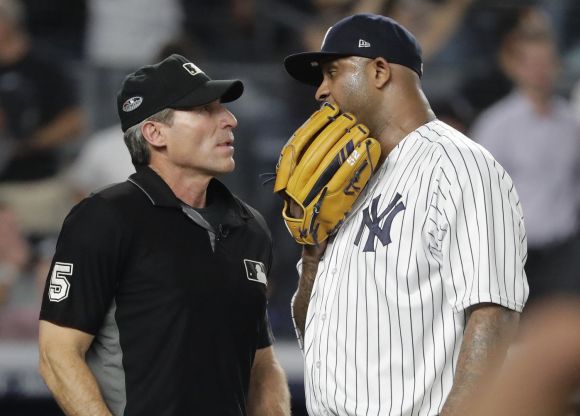 A definite trend bubbled over this season that'll have seamheads debating it for years.

Actually, it's the same trend that's been a hot topic among them for a few seasons, now.

The frequency of strikeouts in the quest to hit home runs.

There is no better team to serve as the collective poster boy for both sidesof the argument than the New York Yankees, and it might've been their downfall in their Division Series against Boston.

The Yankees won Game 2 of this series with five of their six runs coming from the long ball. However, dudes only managed one dinger in the other three games, all of which were won by the Red Sox.

Including the decisive Game 4, although their 4-3 loss doesn't really show how telling. When the rubber met the road in threat after Bomber threat, BoSox pitching played to the big swings and won damn near every battle.

Incidentally, no matter how CC Sabathia wants to swallow his sour grapes, an Ángel Hernández sideshow never happened. He did what competent officials are supposed to do: be invisible.

Starter Rick Porcello and an eclectic mix outta the bullpen -- including fellow starter Chris Sale -- saw to that.

The classic example was a matchup that usually reliable closer Craig Kimbrel got right.

Conversely, it was an absolutely brain-dead at-bat for Giancarlo Stanton.

Dude had to know Kimbrel wasn't gonna serve up any grooved heat with the series on the line. So what's he do with two runners on in a three-run game?

Stanton needs the off-season more than it needs him, perhaps, and a crash course in laying off spinners that start at his knees wouldn't go amiss.

As to the Red Sox, there's a reason they won the AL East and will host Houston in the Championship Series. They showed every aspect of it against the Yankees.