Dodgers Get Machado for a Handful of Magic Beans 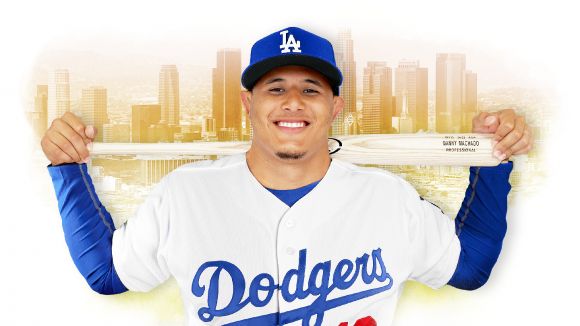 Somewhere in Milwaukee, New York, Philadelphia, and who knows where else, there are dudes sitting in the shadows of their favorite watering holes, cradling something strong and wondering the same thing.

That's what the Los Angeles Dodgers gave up to get Manny Machado?

And then dudes made the next round a double.

Dude's gonna wear No 8 for Los Angeles. The last Dodger to don Jersey No 8 was Shane Victorino in 2012.

No one's wearing Jersey No 8 in Baltimore, of course.

Right now, the Orioles can only hope Díaz can do what he did in the MLB's Futures Game during the All-Star break:

Seems like every year there's a hyped trade for an established veteran that seals the deal for a playoff sport. Take 2015, for example, when the Blue Jays acquired Troy Tulowitzki and David Price.

But that's all Toronto got.

It would seem like Los Angeles has loaded up for the second half and beyond, but the NL West looks more feisty this season than any one position player can affect.

At the very least, though, the Bums will get a close a look at Machado before deciding if his looming mega-contract will be worth battling Philadelphia for being the club to pay for it.

Mid-season auditions worked for, say, the Cardinals when they traded for and then courted both Larry Walker and Mark McGwire.

The classic win-win swap in the short term happened in 1987 when the pennant-chasing Detroit Tigers gave up minor leaguer John Smoltz for RHP Doyle Alexander, who was everything and more for them.

That's a relatively high bar for Machado, and a much higher one for Díaz.