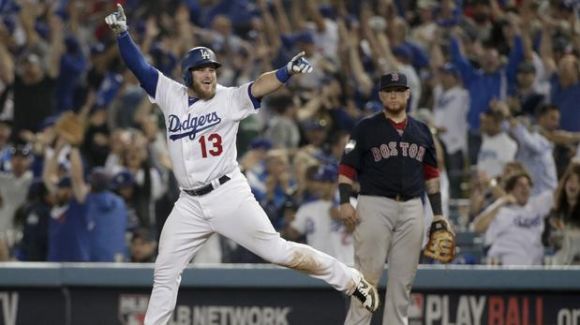 Los Angeles 3B Kevin Turner's been everything to his club this season, and it's because he pays attention to the little things.

One of them was this bitta local knowledge about Dodger Stadium:

In the late innings, look to see if there's dew on the grass. If there is, going oppo's gonna be tough.

Physicists beg to differ. In a way, though, both Turner and the lab dudes have valid observations. Humidity allows a baseball to fly a little farther, but going oppo taco is still an impressive feat.

Max Muncy ended the longest game in World Series history with one, taking the heroic Nathan Eovaldi deep in the 18th inning to get the Dodgers back in the picture after dropping Game 1 and Game 2 in Boston.

It was the latest atonement in a night of them.

Muncy totally butchered an AB in the 13th when he came within a few feet of walking the game off then.

Damn near every player who's made it past high school ball realizes that if ball's pulled hard, the next pitch is gonna be middle out. Thus, that's where they focus.

Muncy got just that and flailed at ball four, a backdoor cutter that didn't.

To his credit, though, he saw the exact same pitching sequence in the 18th.

This time, Muncy was waiting for that cutter and took it where the baseball gods said he should:

Good thing, because getting punched out on that same pitch in the 13th was borderline inexcusable.

But it is now,  and covers both of his sins that inning.

In the Dodgers' half of it, dude made a poor decision on a grounder that gave the BoSox their first shot at winning the game.

Somehow, Muncy forgot or ignored the shift on for the inevitable Eduardo Núñez. Dude charged a tapper that left 2B Kiké Hernández 'way outta position to cover first, and the comedy was on:

Speaking of, Núñez -- easily the 25th dude on Boston's World Series roster -- had quite the eventful night, again:

Eduardo Nuñez showing up to Game 4 tomorrow night like pic.twitter.com/8LjUlQZQwD

Then there was Dodger CF Cody Bellinger getting picked off first by leaving too soon on a 3-2 count against southpaw Rick Porcello.

However, he's also the dude who fired a heatseeker home on a fly ball to nail alleged pinch-runner Ian Kinsler and keep the game tied at that point.

Cody Bellinger are you SERIOUS!?

He throws out the go-ahead run at home in the 10th!!

Really, that's the best BoSox skipper Alex Cora could do for a runner at that point?

Unfortunately for Kinsler, there was no atonement for him anywhere:

No matter what Woody thinks ...

Now is never a good time to panic.

The World Series stage is too big, moments are frozen in history, and a seamhead somewhere has nothing better to do:

Throw was about 100 feet away. A 70mph throw takes 1.1 seconds to reach its target. Kinsler had up to 0.5 more seconds, or about 14 more feet of Puig running pic.twitter.com/Al64axmYQ9

There were heroes, too, of course.

With few exceptions, the pitchers were spectacular, especially ...

Game 3 lasted 440 minutes, which is more than the entire game time of the 1939 World Series.

It had damn near everything that 46 players could pack into a 3-2 baseball game:

Coincidentally, the previous Series record was 14 innings in 1916, which also featured a pairing between Boston and the Dodgers franchise.

Promising lefty Babe Ruth went the distance on the mound for Boston, who won the game, 2-1. Dude took an 0-5 collar but only allowed Brooklyn 6 hits all day.

As far as long games go, then, the Bums got even.

They've still got work to do to make this a long Series, though.