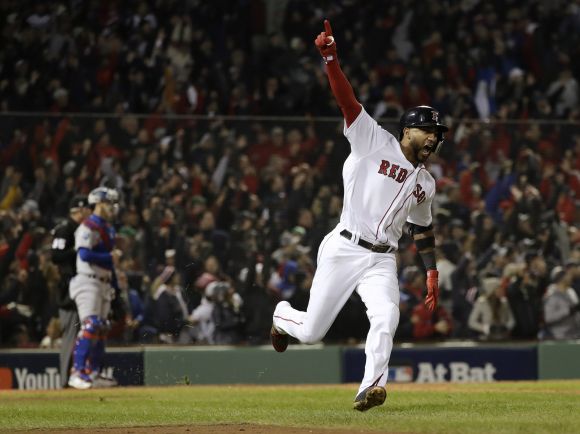 The irony of it all.

The exact factor that clinched the NLCS for Los Angeles -- doing the little things to set up the big things -- took a bite outta their patootie in the World Series opener.

If their gigabytes of scouting data didn't confirm it already, the Dodgers now know firsthand that they can't afford to give an inch of opportunity to the Boston Red Sox.

So when they did -- too many times -- they found themselves on the wrong end of an 8-4 BoSox bombing in Game 1.

The AL champions were lethal with two outs and runners on base, and those runners didn't have to be there:

No wonder Clayton Kershaw looked so exasperated between batters.

It didn't end there.

Twice the Dodgers were slow with the turn on double-play attempts, and twice Boston posted runs when they should've already been in the field.

Can't be doing that against a club that won 108 games in the regular season. Dudes can rake and clearly take what's given to them:

By the time Joc Pederson couldn't get to Benintendi's looper that a speedier Chris Taylor woulda caught. Ground rule double instead of the first out.

It's why Boston had only two outs when pinch-hitter Eduardo Núñez went deep.

Put all these little things together, and ...

The only other time these two clubs met in the World Series was 1916, when Babe Ruth was Boston's ace on the mound and Brooklyn was called the Robins, which may sound odd, but it beat the hell outta Superbas and Bridegrooms.

And the Red Sox beat the hell outta Brooklyn, needing only five games to take the title.

That was a big thing back then, like it still is now, and a little attention to detail has never gone amiss.