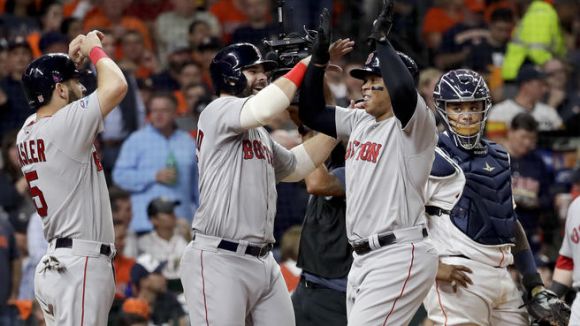 Not that it was ever a question after the season Boston's had, but talk about validation!

Dudes not only ended the defending World Series champions' reign, but they did it in their house against their ace.

What's more, they did it with a jinxed slinger holding the Houston Astros scoreless through six innings before handing the ball to a reliever, a starter, and a dicey closer to complete a 4-1 victory and a 4-1 ALCS sweep.

David Price was task intense from the first pitch.

If he had thoughts of being the sole record holder for most post-season starts with out a win -- dude came into this game at 0-9 with a 6.16 ERA in 11 career playoff starts -- it didn't show.

Quite the opposite, actually. He shut down the potent 'Stros on three hits, walking none and ringing up nine.

Those were all the BoSox needed to back up Price:

The fact he's just become the first Puerto Rican to lead a club to the World Series is icing on the cake.