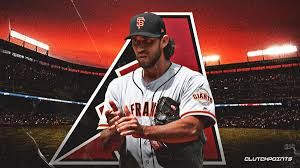 In the USA's most expensive cost-of-living city, it's hard to believe that Madison Bumgarner's remaining contract priced him out of it.

But there it is.

The San Francisco Giants let one of their living legends walk in the name of financial efficiency, and after fears among their fans that he'd sign with the hated Los Angeles Dodgers, the next-worst thing happened.

Dudes not one for revenge, though. He'll still get enough shots at that, what with the fact they play intradivision foes 18 times a season.

Turns out that as long as the money was right, Arizona was the perfect alternative for Bumgarner and his wife. That's where they stable their horses, and dude rides every chance he gets.

That was his segment of the Giants' Opening Day ceremony when they raised the 2014 World Series championship banner, one of Bumgarner's many memories in San Francisco colors.

Those mix rather well with the ones away from baseball, including the time he dated a hometown dudette named Madison Bumgarner.

For Giants fans, the hell of it is Bumgarner isn't exactly over the hill.

Dude's only 30, which isn't all that old in southpaw years. What's more, he's never really needed the hot sauce to be successful; he's wicked enough at 89mph-94mph. Unfortunately, San Francisco's in teardown mode, and his salary just didn't compute in that equation.

It didn't help that he couldn't keep himself in one piece over the past couple of seasons, though, which was compounded by off-field injuries.

The Diamondbacks are a year ahead in that respect. They see Bumgarner as a bargain at the price -- even though it's the second-richest in team history -- that could serve them well for additional moves.

This is also a sign that their 85-77 record in 2019 -- after dealing Zack Greinke and Paul Goldschmidt for prospects -- put them ahead of schedule.

Arizona management is thinking he definitely still is in more ways than one and they won't be.

If the MadBum can benefit from better support in Phoenix, he's got a shot at rebounding to a more career-like standard.

Subject to that working out, dude's well-positioned say his job's done in the desert, saddle up, and ride off into a nearby sunset five years from now.