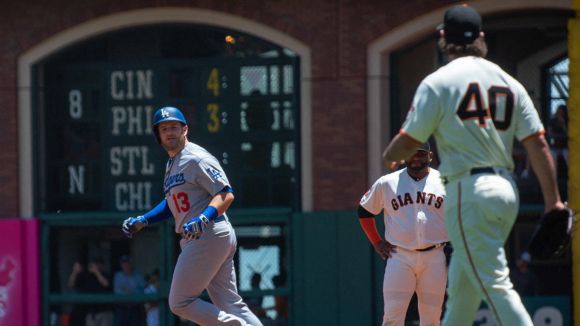 Well, it appears that one of those painfully outdated unofficial baseball codes has been violated again.

As we know, if baseball etiquette is breached while Madison Bumgarner is in the building, then there'll be all manner of hell to pay.

The talented and volatile pitcher threw yet another public tantrum recently, this one directed at an opponent who had the unmitigated gall to do his job at MadBum's expense.

Let's have a look at the San Francisco Giant's giant baby in action against the Dodgers:

As you can see, the noted dirtbike enthusiast had already pissed off the home plate umpire even before the incident in question, but we're going to focus on the Max Muncy splash bomb.

By modern standards, that bat flip-&-watch party were relatively tame, yet MadBum went full get off my lawn anyway, berating the bemused Muncy because he failed to locate his fastball properly.

It's certainly comforting to know that the ever-vigilant Bumgarner is out there protecting baseball's sacred scrolls from these damn kids and their loud music.

Actually, the only surprising development of that entire episode was the fact that Yasiel Puig had absolutely nothing to do with it.

You may have noticed MadBum's use of humor when asked about Puig afterwards.

The dude who could be traded any second now seemed to be bringing the funny after the Muncy incident, as well.

Bumgarner: “I can’t even say it with a straight face but the more I think about it, I should just let the kids play. But I just ... I can’t. ... They want to let everybody be themselves, then let me be myself. That’s me.”

Of course, being a complete dick isn't necessarily what MLB had in mind when they attempted to market fun to the masses.

MadBum was probably just off to the side of that table shaking his trembling fist in protest.