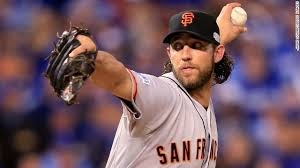 The most important move the San Francisco Giants made in securing the 2014 World Series championship actually occurred in 2009.

That's when Madison Bumgarner stood up to his organization coaches, and they listened.

The Giants wanted the southpaw they drafted in 2007's first round to change his arm angle on deliveries. They sent him back down from AA-ball to High-A for that purpose. Bumgarner tried it, didn't like it, and said so, firm in his belief that his delivery was a major reason he became a top pick.

It's the effects of that delivery that have now given him a third ring, a Series MVP award, and a place in history with immortals such as Christy Mathewson, Waite Hoyt, Carl Hubbell, and Sandy Koufax in posting 20 Series innings with an ERA of 0.50 or better. He's 4-0 with a 0.25 and now has a masterful five-inning save.

Still, it's a team game, and there were other San Francisco heros. Like their slick-fielding keystone combo:

It may well have been. Runner at third with less than two out? A great scoring opportunity wasted in a game where the Royals lost by one.

And simple physics makes clear that a runner should never, ever slide headlong into first base. Dirt creates more resistance than air, as noted in the video clip. There's a reason why first can be overrun; that privilege is abused at the offensive team's peril.

Hosmer's slide wasn't the only crucial miscalculation that become glaringly magnified in a Game 7:

In the other dugout, repentant steroid user and renowned pull hitter Michael Morse drove in two of the Giants' three runs, including an inside-out fist job for the eventual game-winner:

And with that, San Francisco's streak of even-numbered World Series titles continues. Next year is anyone's guess, but gave toward the Bay in 2016. 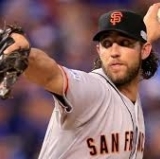 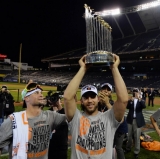