Strasburg's Record Deal Makes Him the Nat Who Says 'Neat'

Published on 9-Dec-2019 by Alan Adamsson 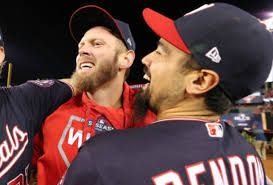 Well, now we know, and few would disagree.

It was abundantly clear that each would get a deal for an amount in excess of $200million, so he'd have to make a choice.

Being real, that was never even a choice.

So of course Washington was gonna do what it takes to lock up Strasburg for ever and ever:

Besides his World Series heroics, dude put together a regular season that led the National League with 209 innings on the way to an 18-win campaign with a 3.32 earnie.

He had four years and $100million remaining on his contract when he opted out of it, so that move parlayed into an extra $145million over three years.

This signing's timing should open up the decision-making floodgates, too.

Last year, the free agent market was never really set because it took so damn long for Bryce Harper and Manny Machado to agree to terms.

Since Strasburg, Rendon, and Gerrit Cole are all represented by Scott Boras, perhaps this means the strategy's changing.

If so, MLB could be in for a newsworthy week.