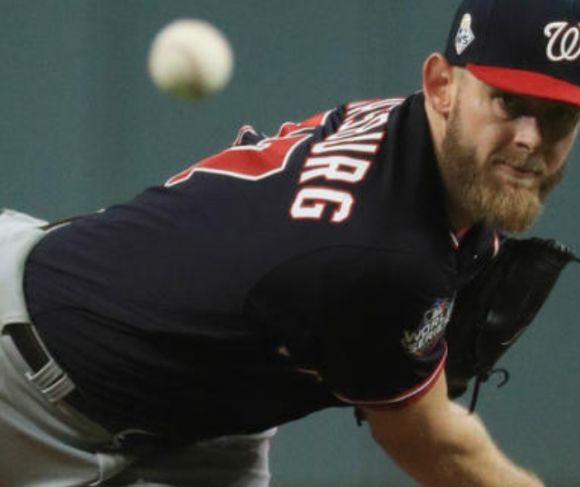 Fortunately, the vaguest rule in MLB's book wound up not having an impact beyond an early shower for Washington manager Dave Martinez.

Impressively, after being touted by every baseball voice in the galaxy that this was the biggest game of his life -- because it was -- Stephen Strasburg justified the hype.

How are these facts still possible in a rational world:

The Nationals are cool with that. Their 7-2 victory extended the Fall Classic to a Game 7 and a shot at winning:

Put those timelines together, and the result is one nation's capital that's ready to accept crazy in order to go crazy.

Weird stuff began appearing in the first inning. That's when Alex Bregman decided to put an exclamation point on his go-ahead dinger by carting his bat all the way down to first base.

So, when Juan Soto went bridge in the fifth, he did the same thing outta baseball's arcane ways of snark.

Believe it or not, MLB has no rule about how far a hitter can carry a bat down the baseline. Any baseline.

Maybe some day, then, we'll see one of them finding a totally new way to break up double plays at second.

But that's not the vague rule.

It came into play when Trea Turner put a swinging bunt down the third base line. Bregman made an outstanding play on the ball, and then ...

Through all this palaver, Strasburg settled into the moment after a shaky start and blanked the 'Stros the rest of the way.

It took a decade of ups and downs, but dude just met every expectation ever placed on him with this outing.

What is there to say about Verlander?

Dude's turning into the American League version of Clayton Kershaw when the World Series rolls around. They're both among the greatest slingers of their generation, but apparently, they morph into pumpkins in October.

Justin Verlander has now lost his last 4 starts when his team had a chance to clinch a playoff series, the longest streak in MLB history.

Of course, his run support has something to do with this, as does the other side's hurler.

And in this case, that dude was magnificent, becoming the MLB's first pitcher to go 5-0 in a single post-season. If the Nats go on to take Game 7 and the Series, he was MVP magnificent.