World Series: Nationals Combine Scherzer, Kendrick, and Road JuJu to Win It All 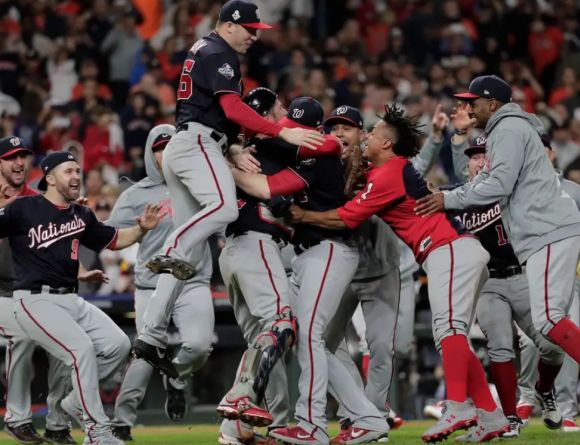 Who knew, back in February, that the two teams who share a Spring Training facility in West Palm Beach would pair up again in October?

Not that winning games was a priority then, but as convenient opponents, the Washington Nationals won the exhibition season series by going 5-1 over the Houston Astros.

Then, with lotsa thrills and spills in the regular season, manager Dave Martinez had a simple message to keep the crew focused ...

And, whaddaya know: Washington just went full-circle with the 'Stros.

The Nationals have won the Series that's baseball's ultimate priority.

The Nats have been battling odds ever since they climbed out of their by-now-fabled 19-31 start to the season.

From that point forward, they actually matched the Los Angeles Dodgers win-for-win to secure a Wild Card spot and then became experts at winning playoff elimination games and toppling top opposition pitching on their way to the World Series:

After Stephen Strasburg held the 'Stros sufficiently in check during Game 6, it seemed like fate intervened to position Max Scherzer for the ultimate start.

Dude recovered from severe neck spasms to keep the Nats close in Game 7, setting the stage for yet another late-inning comeback.

Anthony Rendon, as usual, started it, and pro's pro Howie Kendrick capped it, after which the floodgates opened.

And voilà, the team in their lucky blue jerseys were on their way to a 6-2 World Series-clinching celebration:

For the first time in any major North American pro sports championship series, the road team won every damn game.

And with that, the Astro juggernaut will have to wait a while longer to be anointed as a dynasty.

Zack Greinke was doing exactly what Houston traded for him to do when the Rendon bomb and a Juan Soto walk induced skipper AJ Hinch to make a decision that'll be second-guessed for years.

By next year's Spring Training, that sting may have softened at half of a particular shared complex.

The other half, however, will have stopped wondering by then how they did what they did this fall.

The Nationals will have started working on how they can do it again.