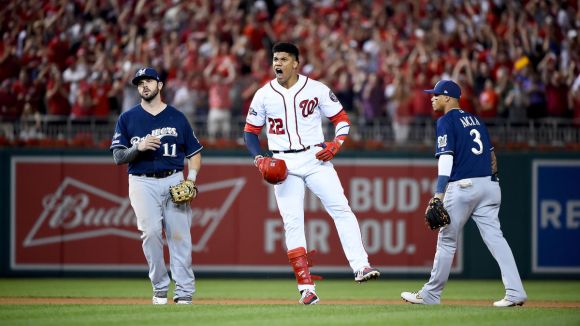 We've seen this in the playoffs before.

Game 7 of the 2016 World Series, when the Cleveland Indians went to Andrew Miller one too many times.

Like most relievers, dude relies on two pitches -- a four-seam heater and slider, in his case -- because hitters don't see that much of him in a regular-season series. However, when a series goes seven games, over-reliance can catch up with a club.

As Mark Twain once observed, history doesn't repeat itself, but it often rhymes.

Maybe a one-game Wild Card playoff doesn't lend itself to over-reliance in one sense, but in another, it did.

Milwaukee Brewers closer Josh Hader's been nails for two seasons because of a lethal two-pitch arsenal of a four-seam fastball and a carve-up slider.

If the Washington Nationals wound up seeing Hader, they were gonna be ready with a simple approach: lay off the slider and hunt the heater.

It was likely a key to the Nats' dramatic three-run eighth inning where they stole a game steeped in stragety, 4-3, and will now advance to the National League Division Series against the Los Angeles Dodgers:

Turns out, though, that closer happened to be the Nationals' trade deadline pickup, Daniel Hudson.

For real. Dude's been lights-out and obviously under the radar.

More importantly, his could control his money pitch. When Hader's slider went south -- or anywhere other than he intended -- the Nationals had their chance.

Soto pulling an outside 95mph rail was proof enough that he was sitting dead red. Hader clearly had no option but to play with fire by then.

As to Trent Grisham, that was his first error in his 51-game MLB career. Dude was just trying too hard to make a play.

That was simply the Joker in Washington's winning hand. They'd played their cards well, and for their reward, they get the Dodgers.