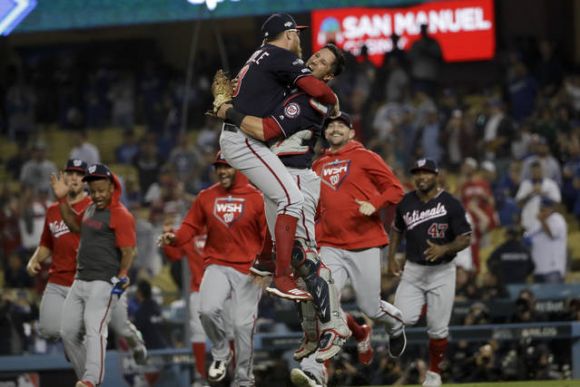 Shades of the 216-win Seattle Mariners.

A quick post-mortem in their case revealed that, among other things, they got fat and sassy on the likes of ...

Stuff that's not conducive to winning a five-game series.

A quick look at the Los Angeles Dodgers' opponent grid for the 2019 season shows they mopped the floor with the NL West, where only Arizona (85-77) had a winning record:

In comparison, the Bums only went 4-3 against Washington and, if they woulda gotten to the NLCS, 3-4 against St Louis.

Turns out, it was.

The Nationals made the most of a five-game series with three aces and two relievers to keep up with the Dodgers, who coulda fielded a strong lineup of 15 position players per game, and the gods know manager Dave Roberts did everything in his power to do it.

As to his pitching, though, maybe dude coulda made better decisions.

Clayton Kershaw racked up his only save in a playoff game, but for whatever reason, dude's not a reliever.

As to Joe Kelly, well.

Professional athletes, more than most, train to recognize their margin of error. Golfers, for instance, know if a water hazard's on the left, they're gonna err to the right.

If Kelly wanted to jam ex-Dodger Howie Kendrick inside with a fastball, then his error margin shoulda been to brush dude back instead of leaving a rail over the plate. Instead ...

Meanwhile, even though Stephen Strasburg got nicked for three runs in the early going, the Nationals just kept grinding until Anthony Rendon and Juan Soto found their moments.

Dudes drew the Nats even by going bridge back-to-back, setting the stage for Kendrick's 10th-innin heroics to nail down the 7-3 series-clincher:

On the bright side, Roberts botched his bullpen management on a lesser stage than he did in the 2017 and 2018 World Series.

Still, yet again, dude's gonna have a lotta Ricky Ricardo-ing in his near future.

And his time under the third-degree scrutiny will be shared.

Many thought it'd be Nats' skip Dave Martinez who'd get the grilling, and long before now. With fans still bitching about the loss of Bryce Harper, his club got off to a 19-31 start before figuring it out.

Washington went 74-38 after that and spent most of that time scrambling to squeeze into a Wild Card spot, as opposed to spending the bulk of the season having the luxury of lining itself up for the playoffs.

Maybe if you're a team loaded with talent and make move based on stats, you should refer to them more intensely when the rubber meets the road.

And maybe if you're spending most of the season scrapping for your playoff future, you just stay a little sharper.