NLDS: Nats' Tag-Team Their Aces Again, Down Dodgers in Game 2 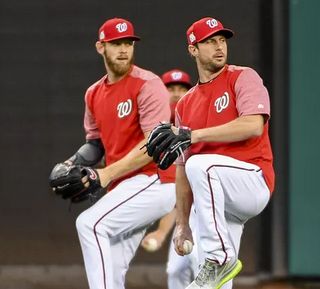 So, do the Washington Nationals now call starters extended openers?

Dude's got three of MLB's most capable aces at his disposal, and he knew his crew couldn't go down two games to the dangerous Los Angeles Dodgers in a five-game NLDS.

Martinez already deployed the 1-2 punch of Max Scherzer and Stephen Strasburg in the Wild Card game. Digging even deeper into this approach, the Houston Astros used it in their farm system to more quickly separate wheat from chaff in starters' prospects.

If you're gonna steal, do it from the best.

Among other things, now the Nats had outnumbered Clayton Kershaw.

Combined with bullpen stalwarts Sean Doolittle and Daniel Hudson, Washington had Scherzer tucked away and ready to do his bit in the late innings. He did, posting a clean 8th to help the Nats claim a 4-2 victory to even this series at a game apiece:

Cruising through six innings and only allowing one run against Los Angeles in Dodger Stadium is a sterling achievement. The Bums are anything but in that yard, going 55-22 there this season.

Well, it's getting there.

Meanwhile, Scherzer looked pretty damn comfortable as a late-inning reliever. As compared to the Wild Card game, this shifting of roles with Strasburg looked like an ominous hint of things to come in this post-season.

This was a much different result than his disastrous outing in Game 5 of the 2016 NLDS. Dude's clearly learned from the experience.