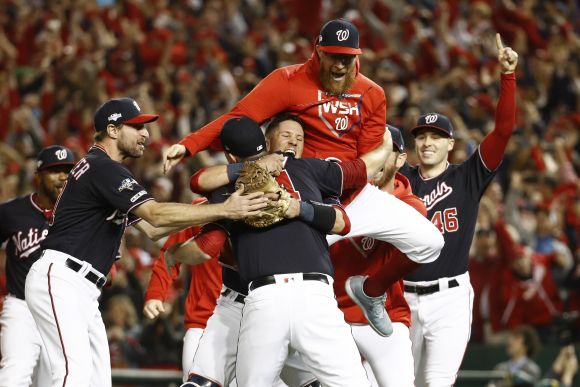 Over to you, Seattle.

As of right now, the Mariners are the only MLB team to never have made it to the World Series.

That's because the Washington Nationals joyously took their name off that sorry list by sweeping the St Louis Cardinals for the National League championship.

As Teddy Roosevelt woulda said, bully for them.

OK, the club stole the Racing Presidents idea from Milwaukee's Racing Sausages and the franchise itself was stolen from Montréal, but enough of the dark side.

There have been three MLB franchises in Washington:

The Los Angeles Dodgers got all the National League's PR for being ominous this season, in part because of their hot start -- 32-18 -- after 50 games.

It's why their best-of-five NLDS triumph over the Bums wasn't all that much of a surprise.

Coming into the NLCS, the Nats may have been the Wild Card survivor, they thus had a better regular season record than the NL Central champion Cardinals.

Each team had a glaring flaw:

The Cardinals needed to get into that pen by the fifth inning. The closest they got was Game 4, where Nats starter barely got that far. Unfortunately for St Louis, that's the game their MLB-leading defense imploded.

Washington's 7-run first inning wasn't quite the 10-run St Louis first against Atlanta, but it held up for a 7-4 clincher that sent DC's baseball fandom into ecstasy:

This came on the heels of yet another standout performance from Stephen Strasburg in Game 3.

Dude punched out 12 Cardinals and Howie Kendrick provided all the cover he'd need to put St Louis in a hole from which they'd never recover:

The 2019 season's stealth-hottest team is in the Big One for the first time ever, ready for whichever better-publicized juggernaut the American League offers up.