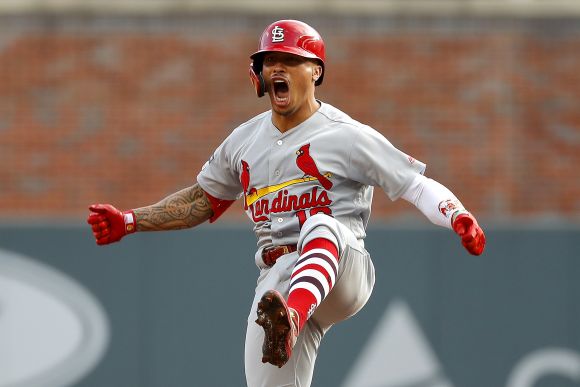 The adage has it that when you go to a baseball game, you've got a good chance of seeing something that's never been done before.

Well, Game 5 of the NLCS clash featuring the Cardinals and Braves offered one up.

No, not the 10-run inning St Louis laid on Atlanta on their way to a 13-1 clincher. It was the aftermath of all that carnage.

Who's ever seen a defensive replacement made before a team's defense ever took the field?

With ace Jack Flaherty due to take the mound -- and actually having run support for one of the few times this season -- skipper Mike Shildt made a calculated move.

OG figured that even though it'd take any opponent a month to ring up that many runs on Bob Gibson's sorta-prodigy, he didn't want to see anything else in this game that no one had ever seen before.

Matt Carpenter was in the starting lineup at 3B but never saw the field.

Instead, with an historic run cushion on the board, Shildt opted to tighten up, shifting the quicker David Eckstein 2.0 -- aka Tommy Edman -- from RF to the hot corner, moving CF Dexter Fowler to right and inserting the swift Harrison Bader in center.

And there it was, a late-inning lockdown move before the Cardinals even took the field.

That's why Shildt spent much of spring training making sure they do the little things and then reinforces them with his ball talk in the locker room before every game. Stuff that we saw in their first inning like:

They also learned from experience in Game 2 to go after anything but one of Mike Foltynewicz's biting sliders, which was probably the most telling factor of all:

And after observing the antics between Ronald Acuña Jr and Carlos Martínez all series -- as well as Flaherty's momentary one-pitch loss of control with the game well in hand and Acuña batting -- the Cardinals' manager uncorked another sorta ball talk to start their locker room celebration:

“The [Braves] started some shit. We finished the shit. And that’s how we roll. No one fucks with us ever. Now, I don’t give a fuck who we play. We’re gonna fuck them up. We’re gonna take it right to them the whole fucking way. We’re gonna kick their fucking ass.” pic.twitter.com/2J7jyJc60O

That bitta exuberance might not make it to the next Cardinals Kids Club gathering, but it is a window into the team's mentality ever since they were treading water with a 44-44 record at the All-Star break.

Shildt's cleary been this season's pied piper, then, but it doesn't hurt to have his pitching staff -- one of whom silenced the tomahawk chop -- and players who keep their focus on detail.

As to the Braves, odds are they're already circling certain dates on next year's schedule.