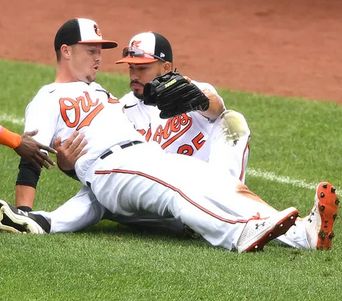 If it seems like a team would have to work at it to be this bad, then the Baltimore Orioles are Exhibit 1.

How else does a baseball club ...

This epic ineptitude makes them the first team in American League history to have a pair of losing streaks of at least 14 games. Worse, they left nothing to chance in the second one.

Dudes are on pace to lose at least 108 games for the third straight season. That's not been done since the New York Metropolitans' first three seasons of existence.

Futility worked back then.

So what's going on?

They're not like the Pittsburgh Pirates, who choose to remain in perpetual miser mode so they can game the MLB system and make healthy profits.

Until his health got the better of him, the Orioles ownership was led by perpetual meddler Peter Angelos, who's fired management and managers for less. However, now that his son John's controlling the club, he's fallen under the spell of current GM Mike Elias.

Because Elias has sold him on a tried-&-true plan.

One look at his résumé tells it all.

Dude was the Assistant GM when Jeff Luhnow rode into town down in Houston. He helped oversee their mega-tank strategy and how all the losing started to bear fruit, ultimately leading to a World Series title ... albeit kinda tainted.

So now, Orioles fans get to endure the pain of paying to see how the sausage is made. They can only hope the Birds cap it off like the 'Stros did, minus the trash can cacophony.

The rebuild began in 2011 with three straight 100-loss seasons, bad enough for fans to joke that when a player started performing for the big club, he'd get called up to the Triple-A team.

Houston made it to the playoffs in 2015 and then won it all two years later.

They've been contenders ever since.

Elias bought in, left the big club to its own devices, and started loading up on talented prospects.

The key's gonna be a batch of them panning out, and according to Baseball America, so far, so good.

In our midseason Farm Systems update, the @Mariners ascend to the No. 1 spot. The @Orioles are now No. 2. If they can hold that spot next offseason, this will be both team's highest-ever ranking since we started ranking farm systems in 1984. ($)https://t.co/cKE70Vav00

Meanwhile, the Orioles' trials-&-tribs found them reducing their own personal magic number to 3.

As in three more victories, and they can't tie the 1962 Mets' infamous record of 120 losses in a season.

That number got reduced by one when Baltimore's offense appeared outta nowhere in the late innings against the Angels -- which was a prime example why they drafter nothing but chuckers this year -- and managed a comeback 10-6 triumph over the Halos:

The good news for Elias?

Now they can start another losing streak.