Astros Getting Better at Being Not As Bad 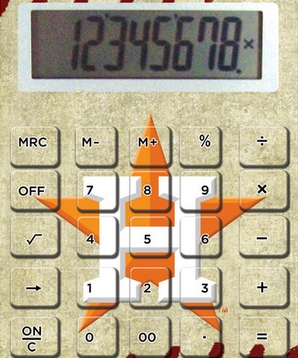 It's now one-third into the season, and GM Jeff Luhnow's super-sabremetrics experiment is showing signs of life.

The Houston Astros go into tonight's tilt against Arizona only eight games under .500, which is more than a handful of other clubs can say.

The 'Stros stand at 29-37, which is a winning clip of .439. Right now, that's better than five others, four of whom haven't been the butt of jokes over the past three years. No need to guess the fifth. It retired the role of butt-dom long ago:

Luhnow came from the St Louis Cardinals front office, where his penchant for trends often locked horns with old-school eye tests. No one can dispute the results of the compromises, but Luhnow wanted full rein whenever his next opportunity beckoned. That happened when new Houston owner Jim Crane agreed to his conditions.

He knew it wouldn't be pretty at the start:

As one would expect from a sabremetrics disciple, Luhnow takes an academic approach to building a strong system.

So Luhnow isn't shy, either, about the concept that with great contracts comes great responsibility.

But he's looking good with his first wave of prospects hitting the big club, starting with George Springer, who's having an immediate impact, as confirmed by his being named May's AL Rookie of the Month. His call-up still had to come withing Luhnow's frame of reference, though:

So, like Luhnow, Springer has this game down to a science already.

This is only Year Three of Luhnow's four-season cycle, and there's no mistaking that the 'Stros have a ways to go, but looking at what Billy Beane's Oakland A's are now doing in consecutive seasons, there's also little doubt that geekball is here to stay.