The Astros Did the Math and It Finally Added Up

Published on 3-Nov-2017 by Alan Adamsson 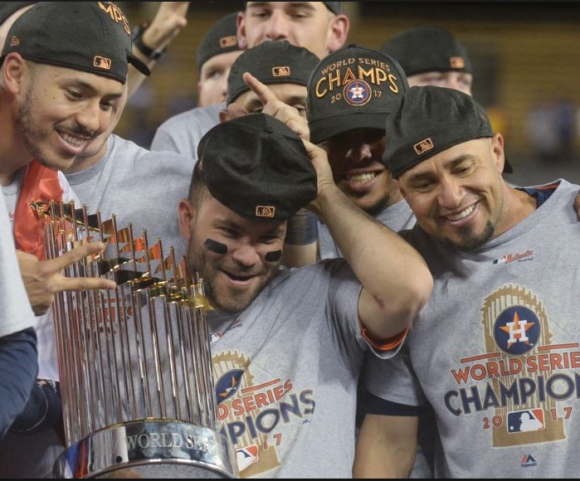 The Houston Astros are basking in the afterglow, and deservedly so.

Dudes had paid their dues.

As the Colt 45s, they sprung to life after the 1961 season because the National League needed a necessary second expansion club to accompany the New York Metropolitans.

In essence, the NL was looking to parry a thrust, and Houston got the nod.

That move was all about the Mets:

In that light, Houston could do whatever the hell it wanted.

However, like most expansion teams -- at least until the NHL's Vegas Golden Knights insisted that big entry fees meant a better player pool from which to draft -- the newly named Astros were consigned to mediocrity.

That was still the case when they ultimately did reach the post season, but at least they had spiffy threads, which gave them an identity until they broke though this fall:

When the 'Stros were losing 100 games three years in a row, this result wasn't a given. They showed signs of improvement here and there in the seasons afterward.

The club's Core Four is quite young by design, so they expect to be a contender for at least the next 4-5 seasons.

The 'Stros had been steeled in the previous year by solid competition in the AL West, but that division surprisingly went south this season ...

... which gave the club a relatively pressure-free campaign to assess their post-season possibilities, make moves, and evaluate how it all was working out.

It was all part of what they believed in the off-season before. The stars were aligned so that this was gonna be their year:

Houston had been at the playoff level before.

So they weren't gonna be satisfied with their season just yet.

Clearly, the club's calculations added up to an historic October for them.

Lotsa right moves at the right times with the right players being in position as if by clockwork:

So here the team and players are, in their very own happy place.

The 'Stros have become the first organization to take mega-metrics baseball to the ultimate championship level. By definition, this will dictate constant roster churning.