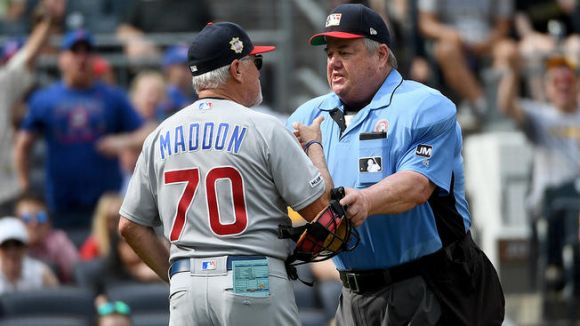 One of the more amusing aspects of MLB is the sight of elderly managers wearing uniforms on the field, just like the players.

However, watching one of these dudes attempt to charge the opponent's dugout in a fit of rage is so much more fun.

Chicago Cubs skipper Joe Maddon provided us with this particular joy in Pittsburgh, and we're all better people for it.

The World Series-winning skipper is both hip and successful, but a literal broken hip was a legitimate concern during the following scrape.

Thank goodness that large cowboy Joe West was able to place his significant girth in between Maddon and Pirates manager Clint Hurdle, because the Cubs' leader is remarkably spry for his age.

The Pirates have developed a well-earned reputation for throwing inside, particularly against the Cubs, so when Javy Báez got buzzed on the knob, he had seen enough.

This was also a pretty transparent attempt by Maddon to light a fire under his sluggish Cubbies, who've been playing like winos for the better part of two months.

Perhaps the Cubs were simply due, but we like to think it was Maddon's unique fighting style that saved the day.

Yep, that was it.