A's Snag 3 of 4 in Houston, Edge Ahead in Wild Card Race 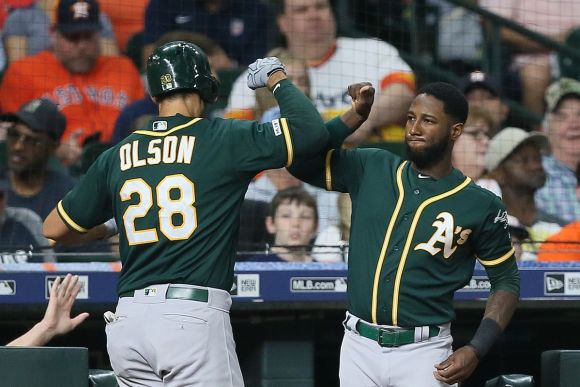 For whatever reason the Oakland Athletics seem to have that month of March lion-lamb thing down pat.

Dudes did it again this season, even putting an international theme to it. They proved anything's possible by dropping two in a row to Seattle.

Then, just like damn near every season this century, Billy Beane & Staff take quick stock of the club, do a bitta legal tweaking, and by mid-season ...

They become a contender.

That's all well and good, but the last time Oakland won the AL West was 2013. They've scrambled to grab a Wild Card spot in 2014 and last season, but that's as far as it got.

So while their fellow challengers have been ramping it up ...

This week had Oakland drawing the short straw. However, feisty souls that they are, afer running into a buzzsaw at Minute Maid Park, the A's proceeded to return a blowout favor before showing the 'Stros who's who in the zoo for the balance of this series, starting with this 5-3 victory:

Beating Justin Verlander, 3-2, on only six hits in the series finale was rather spiffy:

They gave the A's an edge in the race for now:

The Yankees may have a one-game lead on the Astros for overall home-field advantage in October if they can hold serve for two rounds, but this is where the drama's happening.

All for one lousy extra game. But, as Saladin replied what his capture of Jerusalem meant: