Published on 3-Oct-2018 by Alan Adamsson 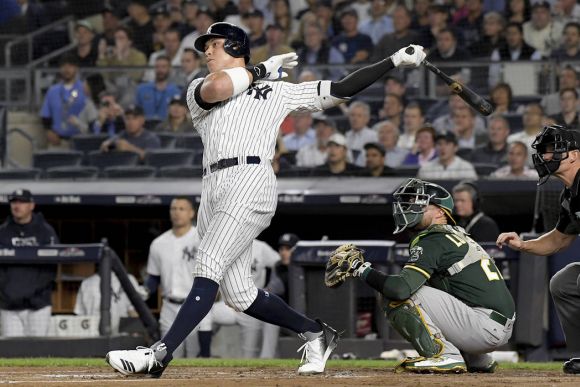 One way to look at this is the threat of an overdramatic Moneyball 2 flick will stay on the shelf for at least another season.

Odds are MLB's owners are viewing the New York Yankees' 7-2 pounding of Oakland's Athletics in the American League Wild Card game with mixed emotions, too:

Remember Branch Rickey? The dude who got infinite kudos for inventing the farm system when he GM'd the St Louis Cardinals and famously giving Jackie Robinson his shot when he ran the Brooklyn Dodgers?

He's also the dude who ran Ralph Kiner outta Pittsburgh because of his high-profile lifestyle, famously telling him:

Who knows how many altars still exist to worship him in owners' secret backroom chambers?

Instead of delving into how Billy Beane combs through sabremetrics to assemble highly serviceable players who tweak the noses of high-priced rosters -- and every half-decade or so, it gets them to a Wild Card loss -- the storyline here is about the club that prefers the convenience of a quick checkout.

The A's spent serious time collecting closers to be ready for an ultimate one-&-done game, but none of them were chosen as openers.

That went to Liam Hendriks, an Australian who's more familiar with the term openers being the first two batsmen in a cricket match.

In that respect, Aaron Judge was a hell of an opener:

Sometimes, all it takes is one swing to set the tone.

Judge has that sorta swing:

This was certainly a redemption for Luis Severino, who's finally erased the memory of his meltdown in last year's Wild Card game.

The five-run difference was a true reflection of this game, too. The Yankees made all the plays that lead to victory and a short trip to Boston.

The A's, meanwhile, will repair to a winter where Beane will likely shuffle the chess pieces again.