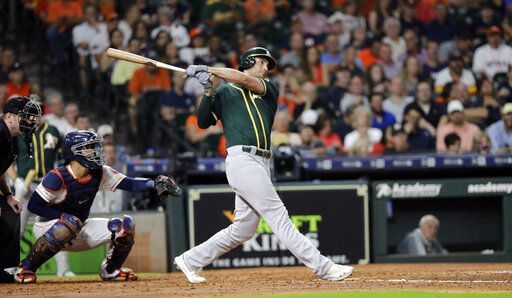 In the end, this was merely two-game split.

The night before, Houston's Astros pounded the beejezzus outta Oakland, 15-0, in one of those games that every MLB team understands is gonna befall it sometime during a 162-game season.

But that doesn't make it sting any less, with feelings of retribution lingering in the wake.

The A's are routinely written outta pre-season playoff scenarios because ...

Actually, the club's miserly perspective is why they have an elephant for a mascot on their uniform sleeves. However, every now and then in their history, the A's have served a reminder that, joke or not, it's still an elephant.

Thus, the potential for a rampage is always just around the corner.

The 'Stros found that out the hard way, as Oakland rebounded from the previous game's blowout to post a 21-7 smackdown on the AL West Division leaders:

Stringing together singles in one rally, and then launching a barrage of six bombs in others, the A's showed once again that they're as versatile as the Astros.

They're just not as consistent, as the current 9½-game gap between them in the division standings shows.

Then again, maybe all this is showing is Houston did a better job of abusing Seattle (16-1) than Oakland (8-7).

That's 7 games in the standings right there. The A's clearly have a snake-mongoose thing going on with the Mariners.

Then again, maybe that accounts for the 'Stros' pad at the top, but that hasn't been the main issue. Even after this rout, Houston's 11-5 this season against the A's.

There are two more games in this series, and if these clubs are to meet after that, it'd be in the post-season. The 'Stros are already cruising into it, while Oakland's battling Tampa Bay and Cleveland for one of the two Wild Card spots.

Should the A's be one of them, they're as potent in short-format series as anyone, including Houston. If anyone ever doubted that, their performance in this one was a reality check.

Never take an elephant for granted.