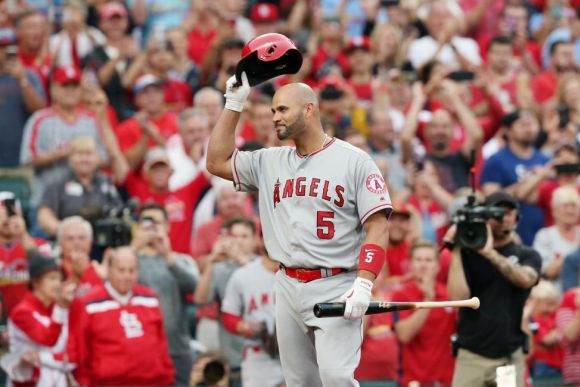 This is the only city where he gets top billing over Mike Trout and Shohei Ohtani, even now.

Albert Pujols, aka The Machine, was firing on all cylinders when his uniform displayed Birds on the Bat.

Not so much since he turned them in for a Halo.

But this weekend in St Louis, with Pujols returning as a player for the first time, any bitterness toward his leaving via free agency back in 2011 has been forgotten:

Is Yadier Molina the André Rieu of St Louis or what?

Gotta wonder if the Cardinals coulda kept him and/or any combination of Adam Wainwright, Matt Carpenter, and Matt Holliday had they decided to match the contract Angels owner Arte Moreno gave Pujols.

What's more, who knew then that The Machine had just peaked?

In that respect, St Louis lucked out, big time.

In real life, it's not like Pujols ever left the Gateway City.

His family still lives there, and he established his foundation there, which raises money to support those families affected by Down's Syndrome. His charity golf tournament is one of the area's highlight events.

The Cardinals may be a high-revenue and high-attendance franchise, but the reality is it's one of MLB's smallest markets: This seems to give the Cardinals and the NHL's Blues even more attachment to the locals as a source of civic pride.

They definitely turned out in force to let bygones be bygones and honor a dude who was once one of their own.

As they've shown tonight and will show this weekend, Pujols still is.