Pujols' 3000th Hit Earns Him Entry into a Rare-Air Club

Published on 4-May-2018 by Alan Adamsson 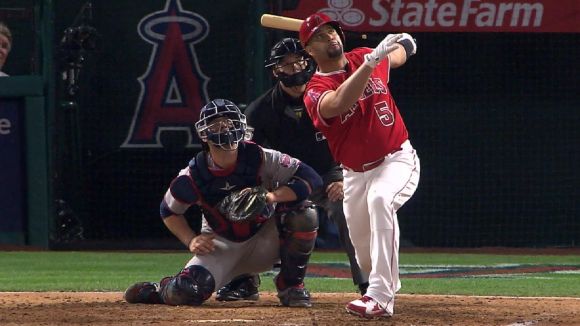 Not a bad achievement for an obscure dude who was a 13th-round draft choice in 1999.

Albert Pujols was plucked outta Maple Woods Community College near Kansas City by a St Louis Cardinals scout who was damn near evangelical about how high this pudgy Dominican's ceiling could be.

Ironically, he was the only player that scout had ever signed. The Cardinals fired him a few years later.

That's the bush-beating scouting biz in a nutshell.

St Louis shoulda given him his own plaque or something. After all, Pujols only gave them an 11-year run with superhuman stats, anchoring two World Series championship teams in the process.

After the sting of losing him to the Angels, that's how Pujols is remembered in this baseball-mad city. Unfortunately, to seamheads and many fans elsewhere, he's now better known as one of baseball's worst-ever free-agent signings.

It's why actuaries earn six-figure salaries from insurance companies and now why like-minded geeks rule the front offices of professional sports franchises.

The tragedy is Pujols was supposed to bring glory to the Halos. Instead, when he whacked career dinger No 600, it almost passed as an afterthought.

But not even the Angels' kinda-there status in the LA sports scene could let this pass by unnoticed:

He hits to every field all of the time. Always has.

Congratulations to Albert Pujols on 3000 Hits. Let's take a look at what 3000 hits looks like over time... Amazing! pic.twitter.com/rb7ka9viZZ

Pujols is the 32nd player to reach that plateau. Uniquely, he did it with another member of the club in attendance.

Thus, at least one OG who's been there an done who had a true clue about what Pujols was thinking and feeling as this momentous milestone approached.

What's more, Pujols has now achieved a standing that only Henry Aaron, Willie Mays and Alex Rodriguez before him have done:

So far this season, he's bounced back from the nadir of his performances the past couple of years. Still, it'll be down to younger phenoms -- like Mike Trout and Shohei Ohtani -- to lead the Angels to another World Series title some day.

For now, though, this was an evening to remember one of the modern game's titans. Even sunsets can offer a fond memory or two.