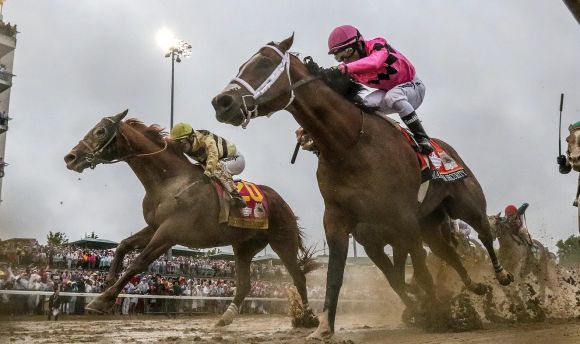 How long's it gonna be until the Law & Order TV franchise introduces a spinoff for sports crimes?

To only name a few:

Now, to the surprise of absolutely no one, here comes another episode of doping the ponies:

The big fish -- trainer Jason Servis -- has definitely been around enough to know better.

OG handled Maximum Security, the steed that won last year's Kentucky Derby but got the big DQ for interfering with the progress of two other horses.

Looks like the latest charges could cost him and 26 others a little more. Maybe even a lot more.

Interestingly enough, Maximum Security was stoked enough to prevail in four of his next five races. One of them was worth a $10million check last month in the world's richest race, namely the Saudi Cup at the King Abdulziz Race Course in Riyadh:

Gotta say, though, whatever masking agent Servis's crew was using, it had to be primo to get past the drug testing in that race.

According to the indictment, the horses were force-fed all manner of illegal and experimental drugs that allowed them to run unnaturally fast and mask pain, which as a matter of course caused a number of injuries or death due to overexertion.

Incidentally, none of these charges were related to the perplexing number of horse mortalities in SoCal:

If those incidents don't offer a clue as to the fragility of equine health in stressful situations, they certainly serve as stark proof that anything extra to push performance can be inexcusably lethal.

Being willing to trade unassuming lives for money is lower than low.

The stupidity on display here goes beyond being callous.

How in the name of John Gotti does any criminal think a wide-ranging conspiracy isn't gonna spring a leak?

The only silver lining is villainy that vast is gonna come to its inevitable end. Too bad it leads to the same result for some of the world's best four-legged athletes.